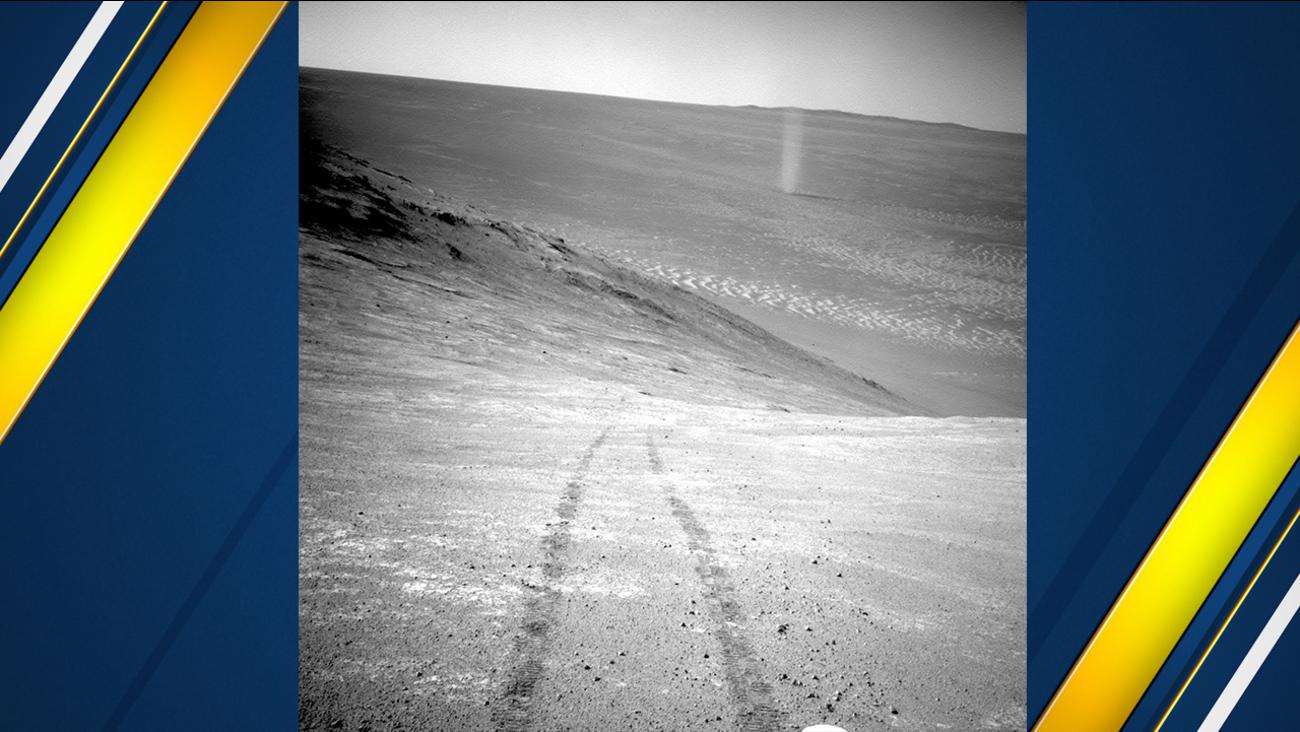 This March 31, 2016 photo made available by NASA shows a dust devil in a valley on Mars, seen by the Opportunity rover perched on a ridge. (NASA/JPL-Caltech)

CAPE CANAVERAL, Fla. -- NASA's Opportunity, the Mars rover that was built to operate just three months but kept going and going, was pronounced dead Wednesday, 15 years after it landed on the red planet.

To the robot who turned 90 days into 15 years of exploration:

You were, and are, the Opportunity of a lifetime.

The six-wheeled vehicle that helped gather critical evidence that ancient Mars might have been hospitable to life was remarkably spry up until eight months ago when it was finally doomed by a ferocious dust storm.

Flight controllers tried numerous times to make contact and sent one final series of recovery commands Tuesday night along with one last wake-up song, Billie Holiday's "I'll Be Seeing You." There was no response from space, only silence.

"This is a celebration of so many achievements," NASA Administrator Jim Bridenstine told team members gathered at NASA's Jet Propulsion Laboratory in Pasadena, California, for what amounted to a wake for the intrepid rover.

The golf-cart-size Opportunity outlived its twin, the Spirit rover, by several years. The two slow-moving vehicles landed on opposite sides of the planet in 2004 for a mission that was meant to last 90 days.

The golf-cart sized Opportunity rover bounded onto the surface of Mars on Jan. 24, 2004 PST https://t.co/BWutGEUcwe#ThanksOppy pic.twitter.com/0areL6MnsR

In the end, Opportunity set endurance and distance records that are years, if not decades, from being broken.

Rolling along until communication ceased last June, Opportunity roamed a record 28 miles (45 kilometers) around Mars and worked longer than any other lander - anywhere, ever.

Its greatest achieving was discovering, along with Spirit, evidence that ancient Mars had water flowing on its surface and might have been capable of sustaining microbial life.

Oppy proved beyond a doubt that ancient Mars had lots of liquid water. These hematite spheres, nicknamed "blueberries," formed in the presence of H2O. https://t.co/2kz6YLjRer#ThanksOppy pic.twitter.com/L9yS0a7k1X

Opportunity was exploring Mars' Perseverance Valley, fittingly, when the fiercest dust storm in decades hit and contact was lost. The storm was so intense that it darkened the sky for months, preventing sunlight from reaching the rover's solar panels.

When the sky finally cleared, the rover remained silent, its internal clock possibly so scrambled that it no longer knew when to sleep or wake up to receive commands. Flight controllers sent more than 1,000 recovery commands to Opportunity, all in vain.

With project costs reaching about $500,000 a month, NASA decided there was no point in continuing.

As it became clear the rover was about to be declared dead, Bridenstine said that he was encountering people "a little choked up" but that the general mood was one of celebration.

Scientists consider this the end of an era, now that Opportunity and Spirit are both gone.

This isn’t the end. Opportunity lives on in current and future Mars missions. https://t.co/POzRmYauHo#ThanksOppy pic.twitter.com/AKXRvYNR4T

Opportunity was the fifth of eight spacecraft to successfully land on Mars so far, all belonging to NASA. Only two remain working: the nuclear-powered Curiosity rover, prowling around since 2012, and the recently arrived InSight, which just this week placed a heat-sensing, self-hammering probe on the dusty red surface to burrow deep into the planet like a mole.

Three more landers - from the U.S., China and Europe - are due to launch next year.

Bridenstine said the overriding goal is to search for evidence of past or even present microbial life at Mars and find suitable locations to send astronauts, perhaps in the 2030s.

"Here's, I think, an important thing to remember," Bridenstine told the AP. "There are a lot more missions to be done and there are a lot more discoveries to be made. And while it is sad that we move from one mission to the next, it's really all part of one big objective."
Report a correction or typo
Related topics:
sciencenasamarsspacescience
Copyright © 2021 by The Associated Press. All Rights Reserved.
NASA
Bezos, Branson stripped of newfound 'astronaut' titles
Who is Wally Funk, the 82-year-old pioneer who went to space?
Moon wobble to bring surge in coastal flooding in 2030s: NASA
Bezos picks 82-year-old female aerospace pioneer to go to space
TOP STORIES
Kern County Sheriff's deputy among 5 killed during standoff in Wasco
CA to require vaccination or testing for state workers
1 killed, 1 injured in Reedley shooting
20-year-old shot at apartment complex in west central Fresno
Shooting suspects crash car in central Fresno during chase
Fresno non-profit gets furry addition to help trafficking victims
VA mandates COVID-19 vaccination for health care workers
Show More
2 people killed, 2 others injured in crash near Kerman
Bezos, Branson stripped of newfound 'astronaut' titles
Gymnastics team wears different uniform to protest 'sexualization'
Paramedics assigned to Dixie Fire in NorCal save drowning boy
19-yr-old from Visalia killed in head-on crash with drunk driver: CHP
More TOP STORIES News