KFSN
By Sontaya Rose
FRESNO COUNTY, Calif. (KFSN) -- 800 workers were perched on ladders grabbing handfuls of cherries as fast as they can. The race is on to get the coral and brooks cherries off the trees before the grey skies open up.

Scott Marshall is a Caruthers farmer who has a lot riding on the line. For the past few days, his orchard has looked more like a parking lot. Farm workers are busy filling boxes and seconds later they are loaded and driven to a big rig. Even the possibility of brief passing shower means instant stress.

"After every storm the packout goes down a little bit," Marshall said. "So it just gets a little bit worse and worse each day."

What began as a promising season quickly faded with each spring storm system. Up and down the state cherry farmers have been humbled by nature.

Every year, Prima Frutta packs on average two million boxes of fresh cherries from Bakersfield to Stockton. This year, many farmers will be in the red. So some are cracking open their wallets to try to salvage at least some of their crop.

RELATED: Another chilly night ahead. Shower likely in parts of the Valley

"We have helicopters that they rent post the rain," said Bob Cademartori. "They'll go at a certain speed at a certain height and just with the prop wash will gently wave the limbs so the water droplets are separated from the cherry itself."

Marshall is estimating about 50 percent of his crop will be making it to grocery stores. But the other half may end up getting dumped by the packing house. Just in case, he called his insurance company to come out and survey the damage.

The vulnerability of cherries is why many farmers who grow the tender fruit also have other more stable crops- to sustain them during years the cherries bomb. Marshall is the same. Still- the good years keep him inspired.

RELATED: Storms devastate crops in the Valley, growers brace for next round of wild weather

Sleepless nights have dominated this season Tuesday as the reds were hauled off. Marshall's next specialty variety was also being picked. The crop has been coloring up the past few days.

"My main concern is the rainier variety which we just started today," he said. "We'll run it on the pack line tomorrow and keep our fingers crossed."

Many cherry farmers say they are trying to make the best of a bad situation. But for some, this year has been a wipeout.
Report a correction or typo
Related topics:
weatherfresno countyagriculturestormweatherfruit
Copyright © 2020 KFSN-TV. All Rights Reserved.
AGRICULTURE From the fields to a Masters in STEM 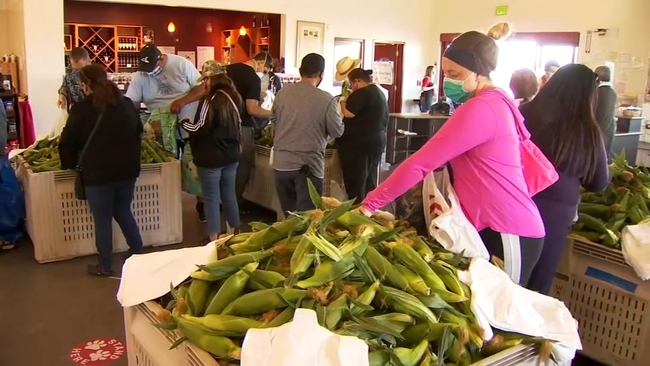