KFSN
By Vanessa Vasconcelos
SANGER, Calif. (KFSN) -- A series of storms is making this a May to remember.

Back on the Valley floor, rainfall totals either reached or surpassed 100 percent of normal in Merced and Fresno.

The unseasonable weather pattern prompted the Bureau of Reclamation to increase releases at Friant Dam, sending rushing water to the San Joaquin River.

"We don't want to get all the way to the top with a lot of snowmelt still to come because that means whatever Mother Nature brings now you have to release it," he said.

"A cubic foot is about the size of a basketball, so that's 5,000 basketballs coming at you per second," Jackson said. "That's a good flow."

The flow from Friant dam may increase to 7,000 cubic feet per second in the coming days, but Jackson hopes it doesn't get to that level.

"It puts pressure and stress on the levee systems and also there's homes and things downstream," he said.

As more people head to the waterways, the Fresno County Sheriff's Office will have boat patrols along the Kings River, Shaver Lake and Pine Flat Dam.

"Mother Nature and waterways are not something to toy with," said Sheriff's spokesman Tony Botti. "You have to have the right gear know your swimming abilities."

Officials are even warning hikers along waterways to exercise caution.

"The last thing we want to see is someone take a fall and then go into the water on top of it," Botti said.

As conditions start to warm up throughout the summer, you'll see more people coming out for recreation. Even water that is only a foot deep, if it is moving fast enough, would cause you to lose your balance and be carried away.

Officials are reminding you that it is to never have your back to the water and to always have an eye on the little ones.
Report a correction or typo
Related topics:
weathersummerrecreationwatersnow totalswater searchweatherrain
Copyright © 2020 KFSN-TV. All Rights Reserved.
WEATHER 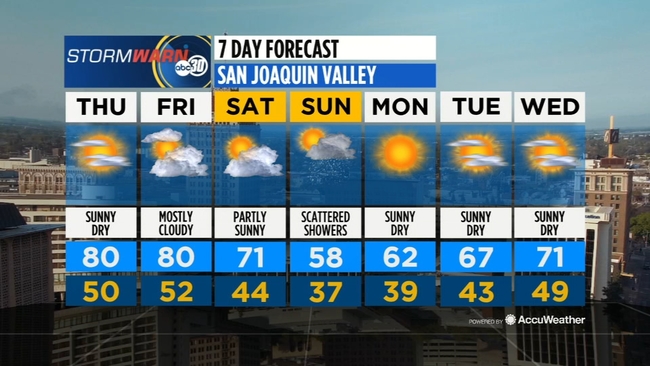