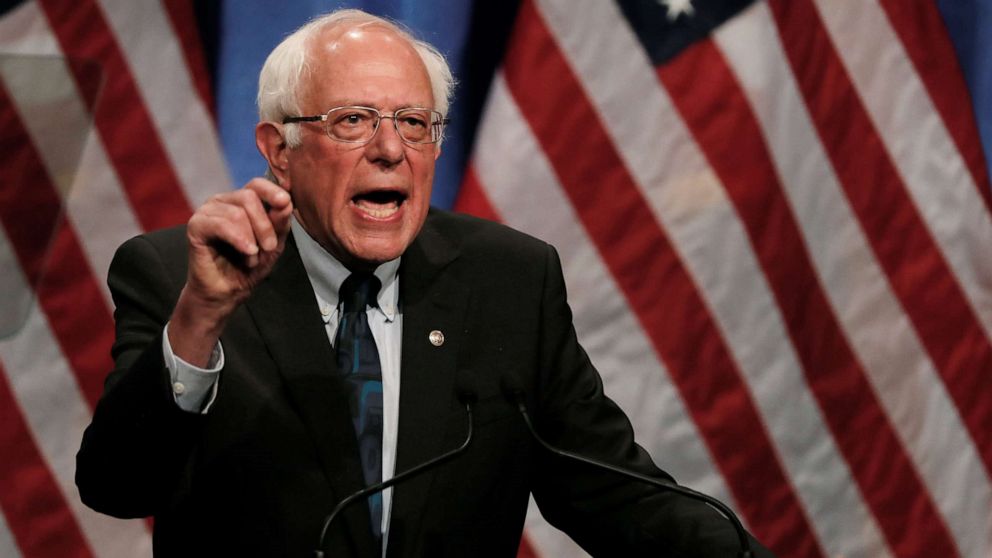 A fiery Sen. Bernie Sanders repeatedly channeled the economic successes and social reforms of President Franklin Delano Roosevelt as he delivered an impassioned address Wednesday about his belief in Democratic socialism - a high-profile defense of a political ideology that's been targeted by both conservative Republicans and moderate Democrats as each group charts a path towards success in the 2020 presidential election.

"It is my very strong belief that the United States must reject that path of hatred and divisiveness, and instead find the moral conviction to choose a different path, a higher path, a path of compassion, justice and love," Sanders said to a packed room of more than 400 supporters at The George Washington University in Washington, D.C. "And that is the path that I call democratic socialism."

Sanders, I-Vt., currently in the midst of his second consecutive bid for the Democratic Party's presidential nomination, made his argument in two ways during the remarks, claiming that democratic socialism was rooted in fairness and less radical than characterized by its opponents, and that it was also the easiest way to differentiate his campaign from the presidency of Donald Trump and forces of "oligarchy and authoritarianism" around the world.

"That is what I mean by Democratic socialism," he added.

The senator continued by noting that the government intervention he was proposing in health care, welfare, education and other facets of society goes uncriticized by "President Trump and his fellow oligarchs" when delivered in the form of "corporate socialism."

"In 2008, after their greed, recklessness and illegal behavior created the worst financial disaster since the Great Depression, with millions of Americans losing their jobs, losing their homes, losing their life savings, Wall Street's religious adherence to unfettered capitalism suddenly came to an end," he recounted. "Overnight, Wall Street became big government socialists and begged for the largest federal bailout in American history: some $700 billion from the Treasury and trillions in support from the Federal Reserve."

The speech was similar in many ways to an address Sanders gave in November 2015 in which he also described his political leanings. That speech, presented at Georgetown University, just up the road from Wednesday's remarks at The George Washington University, came at a time in which the senator's platform was considered more radical and far further to the left of the greater Democratic Party.

Since then, a number of Sanders' favored proposed progressive policies, such as Medicare-for-all and free college tuition, have widely been embraced, and figures like Rep. Alexandria Ocasio-Cortez, D-N.Y., have further pushed Democratic socialism into the mainstream consciousness.

As he railed against politics "that have encouraged and subsidized unbridled corporate greed" leading to "an economy that is fundamentally broken and grotesquely unfair," the senator called upon Roosevelt, recalling that his leadership during The Great Depression that faced "scare tactics" similar to those Sanders' argued were multiplying today, such as xenophobia, racism and anti-Semitism.

He later expanded on Roosevelt's 1944 proposed "Second Bill of Rights," by proposing an "Economic Bill of Rights," one which includes "a decent job that pays a living wage," "quality health care," "complete education," "affordable housing," "a clean environment" and "a secure retirement."

"We must recognize that in the 21st century, in the wealthiest country in the history of the world, economic rights are human rights," Sanders continued.

Sanders speaks frequently to his leadership on such issues and on the campaign trail, often describing how the platform he ran on in 2016 is now, among many Democrats running for the White House, considered somewhat rote.

However, Sanders did not stop short of attacking Trump in his remarks in Washington, D.C. Wednesday, telling the crowd the Trump family has at many times benefitted by tax breaks.

"If you are the Trump family, you got 885 million worth of tax breaks and subsidies for your family's housing empire, that was built [sic] on racial discrimination. When Trump screams socialism, all of his hypocrisy will not be lost on the American people," Sanders said. "That is the difference between Donald Trump and me. He believes in corporate socialism, for the rich and powerful, I believe in a Democratic socialism that works for the working families of this country."

Even before Sanders' remarks, the ideology was preemptively rebutted by the GOP and some of his Democratic opponents in the race for the presidency.

"From govt-run health care to the radical Green New Deal, socialist policies are now mainstream in their party," she continued. "And it's beyond extreme."

Bernie Sanders isn't the only one promoting socialism today.

From govt-run health care to the radical Green New Deal, socialist policies are now mainstream in their party.

And it's beyond extreme.

- Ronna McDaniel (@GOPChairwoman) June 12, 2019After meeting his moderate message with boos from a California crowd at the state's Democratic party convention in San Francisco earlier this month, one of Sanders' most critical opponents in the race so far, former Maryland Rep. John Delaney, released a statement saying socialism won't fix the economy.

"I believe he is wrong," Delaney wrote. "Socialism -- or any new name Senator Sanders has for it -- is the wrong answer; the right answer is to make capitalism more just and inclusive."

Sanders addressed some of the expected criticism during his remarks in Washington, explaining that it was to be expected and that there would be "those who attempt to use the word socialism as a slur."

"But I should also tell you, that I have faced and overcome these attacks for decades," he said. "And I am not the only one."
Report a correction or typo
Related topics:
abc newsnational
Copyright © 2021 ABC News Internet Ventures.
More Videos
From CNN Newsource affiliates
TOP STORIES