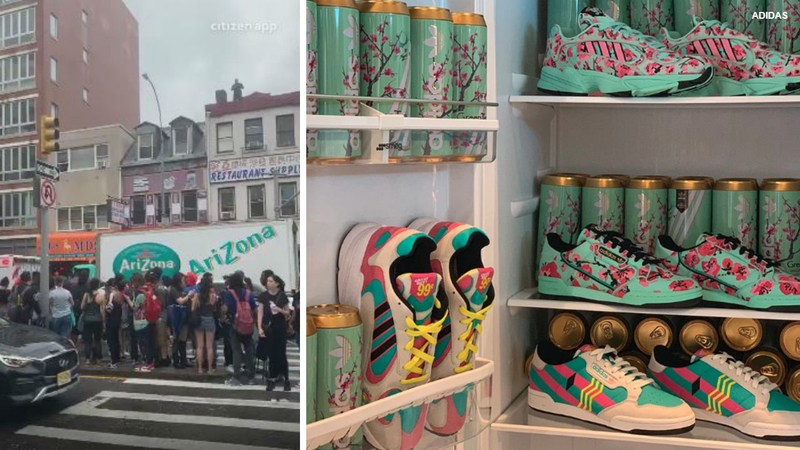 LOWER EAST SIDE, Manhattan -- The NYPD had to respond after special 99-cent sneakers at a pop-up store caused a frenzy in Manhattan.

The incident was reported at the highly anticipated Adidas/Arizona Iced Tea pop-up near Spring Street around 9 a.m. Thursday.

The themed sneakers were set to be released Thursday at 11 a.m. for less than a dollar. Video from Citizen App showed lines of people around the block standing in the rain.

It is estimated several hundred, if not 1,000, people showed up to get their hands on a pair of the shoes. Some people even camped out overnight.

Police say two people were assaulted while waiting in line for the shoes: A 17-year-old girl was punched and struck with a bottle and a 15-year-old boy was punched in the face. No arrests have been made in connection to those assaults.

However, two people were taken into police custody for separate incidents: A 21-year-old man will receive a summons for flying a drone above the crowd and a 43-year-old man was arrested for disorderly conduct.

Organizers eventually shut the entire event down -- both for Thursday and Friday.

Thanks to our loyal fans that came out to support our partnership with Adidas. Due to overwhelming demand and safety concerns, the NYPD shutdown our pop-up. We sincerely apologize to all our fans that waited in line. We are actively working to remedy the situation.

Despite the chaos and the shutdown, many people lingered in the area for hours.

"Everybody is upset, these people have been waiting since whenever and we're just occupying Bowery because they're still waiting to see if it's going to happen and everyone is looking on Facebook and Instagram to see what Arizona is going to say, but I think they just shut it down," a crowd member said.