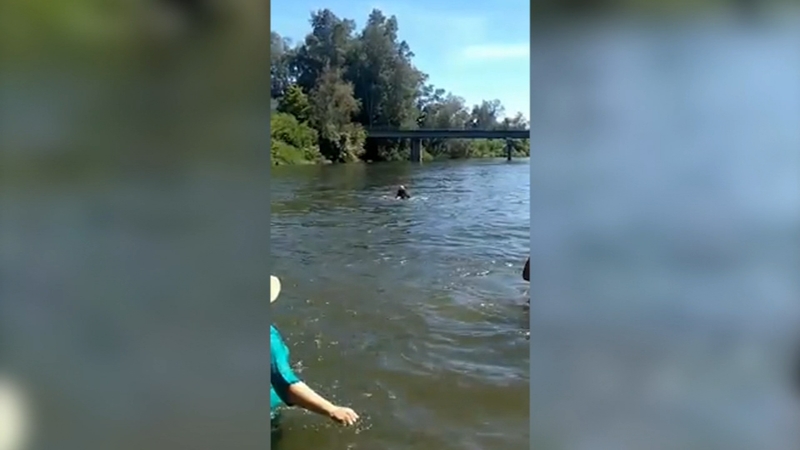 Bystanders say that man jumped into what looked like calm water only to realize he underestimated the current's strength.

"He kept saying help, help and he kept going, he was fighting the current," said Jose Morales of Orange Cove. "Usually you don't fight the currents really strong."

It was Morales' second time at Reedley Beach. He was trying to escape the heat with family, but he had no idea he'd become a hero -- twice.

"I just threw one of my life jackets at him," he said.

Shortly after, a child became in distress.

"I see the little kid going more in the deep. I just got my jet ski to see if he could hold onto it," Morales said.

He says because of the unpredictable nature of the water, he didn't try to swim out on his own. It's a sentiment first responders are echoing.

"When its a situation like that you can end drowning to help him," Morales said.

According to Reedley Fire, it was just before 6:30 p.m. Saturday when they received a call of the incident.

Five children ranging from the ages of four to 17 were playing in the water when at some point, one went underwater. The others trying to rescue the child also fell victim to the water.

"A lot of alert people down there alerted one of our officers," said Sgt. David Omstead with Reedley Police. "At which, they were able to pull everyone out of the river."

In the hot summer months, Reedley Police have one officer patrol the beach on weekends from 1 p.m. to 9 p.m., but they're typically monitoring for disturbances and alcohol.

"You can be a good swimmer, but you can get caught in that current and it's going to pull you down," Omstead said.

While some question why lifeguards aren't on duty, first responders say it's important to remember this isn't a controlled environment.

"It's not your typical like a city pool where you can train someone, that is an environment where you need swift water rescue skills," Omstead said.