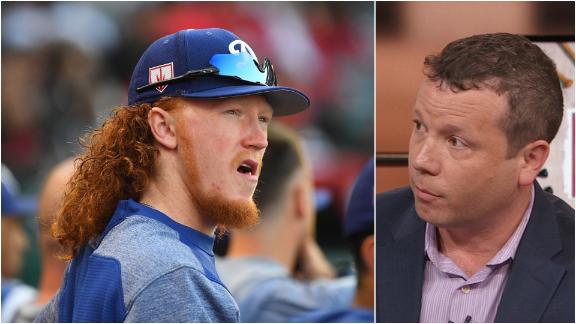 LOS ANGELES -- Hyun-Jin Ryu awoke Thursday morning with stiffness on the right side of his neck. Twenty-four hours later, the discomfort lingered, prompting the Los Angeles Dodgers to put their best starting pitcher on the injured list for what appears to be a precautionary reason.

Dodgers manager Dave Roberts said he expected Ryu, 11-2 with a major league-best 1.53 ERA, to miss only one start.

"I don't think it's going to be that big a deal," Roberts said Friday. "Where we're at, with his neck, I didn't want to compromise anything."

Tony Gonsolin, recalled from Triple-A, will temporarily take Ryu's rotation spot by starting Monday's game against the St. Louis Cardinals. Dustin May, another top-tier pitching prospect, was officially called up for his Friday debut against the San Diego Padres and took the roster spot of reliever Dylan Floro, who was sent to the minor leagues.

May, a 21-year-old right-hander, is nicknamed "Gingergaard" because his flowing red hair and big-time fastball remind some of New York Mets ace Noah Syndergaard.

May was 6-5 with a 3.38 ERA over 20 starts between Double-A and Triple-A this season. Last month, ESPN's Keith Law ranked him as the No. 13 prospect in all of baseball, and the No. 4 pitcher.

May went 5 innings Friday night and gave up three earned runs on nine hits in the Dodgers' 5-2 loss. He struck out three while walking none.

May and Gonsolin will factor into that.

"They both have a high ceiling," Roberts said. "I think what I'm looking for is just for those guys to stay within themselves and not try to do too much. The talent is definitely better [in the major leagues], but they're here for a reason."