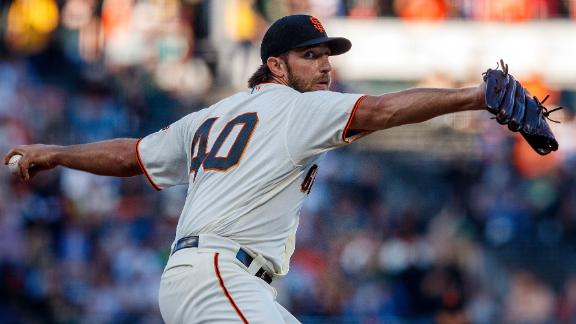 SAN FRANCISCO -- As he often does, Madison Bumgarner helped the Giants win with his big left arm and his bat.

MadBum just put down a perfect bunt this time instead of swinging for the fences.

"Whenever it's a situation like that, no doubt, yeah," he said.

Bumgarner (8-7), 5-0 over his last 10 starts with the Giants going 9-1, allowed two hits and didn't walk a batter for the sixth time this year. He also laid down a sacrifice bunt in the seventh that led to pinch-hitter Scooter Gennett's sacrifice fly and a key insurance run.

Evan Longoria and Kevin Pillar each hit RBI doubles during a string of three straight two-out doubles by the Giants in the sixth against Anderson (10-8).

"If I could change one pitch it would be the one to Pillar. Ultimately that was the deciding factor," Anderson said.

Stephen Piscotty homered in the fifth, but otherwise Bumgarner shut down the powerful A's lineup. Oakland faced a lefty starter for the fourth time in six games after doing so just once the previous 18.

Marcus Semien got a strange single to start the game when first baseman Aramis Garcia ran over the right-field line into foul territory then back fair as the ball dropped out of his reach.

Bumgarner then retired the next 13 Oakland batters in order, including eight of 11 on strikeouts before Piscotty connected for his 12th homer on a drive to left with two outs in the fifth.

Will Smith allowed Dustin Garneau's leadoff single in the ninth, a pinch-hit single to Khris Davis, then struck out Semien before Matt Chapman's single loaded the bases for Matt Olson. Chapman had moments earlier just missed a home run to left, foul by inches.

Chapman struck out and Mark Canha walked to bring home a run, then Chad Pinder struck out as Smith escaped with his 29th save in 32 chances.

Anderson struck out four and didn't have a walk in six innings, giving up two runs on six hits. He was trying to win consecutive starts for the first time since May 20 and 26 against Cleveland and Seattle. He dropped to 2-5 in 11 career starts against the Giants, 1-5 in San Francisco, and 6-3 in 13 road starts.

HE BELIEVES IN STEPHEN VOGT

A's manager Bob Melvin still keeps in regular touch via text message with now-Giants catcher Stephen Vogt, who made a remarkable comeback from significant right shoulder surgery last year with Milwaukee. The 34-year-old Vogt played for Oakland from 2013 through part of '17, when the A's designated the fan favorite for assignment in June that year. Vogt was so likable he drew chants of "I believe in Stephen Vogt!"

Not in the lineup, Vogt exchanged handshakes and hugs with many of his old teammates as the A's took the field for pregame warmups.

"I'm a big Stephen Vogt fan. I hope he takes a couple days off here," Melvin said. "It's pretty remarkable if you actually know what he came back from because he had a shoulder issue that looked like he might not play again. And to work as hard as he did to get back and now he's playing and swinging the bat as well as he has, it's impressive to watch. If you know him, you know he worked about as hard as you possibly could to get back to this and I know he feels good about where he's at. So hat's off to him."

Athletics: LHP Sean Manaea struck out 10 over 5 2/3 innings for the victory with Triple-A Las Vegas in a win at Omaha earlier Tuesday. He allowed one run on four hits with two walks. Manaea, who also experienced some soreness in his right side during a June simulated game, is closer to returning for the first time since having shoulder surgery last September. "This is by far his best outing since he's been on rehab and coming off the side thing it was good to see," Melvin said. "I think he was in the 80s with his pitch count and we'll probably discuss where we go next with that. Very encouraging outing for him." ... C Josh Phegley (bruised left thumb) was hit by a pitch in the upper part of his left shoulder while rehabbing Monday with Las Vegas and was set to rejoin the A's to be examined. Melvin is hopeful it will only hinder him for a couple of days. ... CF Ramon Laureano, on the injured list with a stress reaction in his right shin, is doing everything but running as he progresses in his rehab.

Giants: 3B Pablo Sandoval is dealing with right elbow inflammation and loose bodies in the elbow and missed his third straight game. "He's doing better today. He's made progress. He's able to hit," Bochy said. "Right-handed, after he hits it seems to bother him more. Throwing is where it's flaring up on him." ... LF Alex Dickerson (right oblique strain) was designated hitter in a rehab appearance for Triple-A Sacramento on Tuesday and could be back with the Giants as soon as Wednesday, or early in the next series beginning Thursday at Arizona. "I'm not saying we're going to activate him but we'll at least evaluate him," Bochy said.

RHP Homer Bailey (9-8, 5.54 ERA) takes the mound for the A's opposite RHP Tyler Beede (3-6, 5.61) as the clubs conclude this quick two-game series before meeting in the second installment of the Bay Bridge Series from Aug. 24-25 in Oakland.