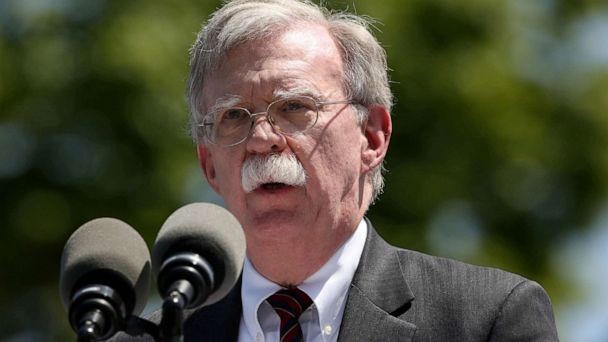 ABCNews
By JORDYN PHELPS
President Donald Trump on Tuesday tweeted that he had fired National Security Adviser John Bolton amid reports of conflict among the president's foreign policy advisers over Afghanistan, North Korea and Iran.

"I informed John Bolton last night that his services are no longer needed at the White House. I disagreed strongly with many of his suggestions, as did others in the Administration, and therefore......I asked John for his resignation, which was given to me this morning. I thank John very much for his service. I will be naming a new National Security Advisor next week," Trump tweeted.

....I asked John for his resignation, which was given to me this morning. I thank John very much for his service. I will be naming a new National Security Advisor next week.

- Donald J. Trump (@realDonaldTrump) September 10, 2019 Within minutes, Bolton tweeted that, in fact, he had offered to resign Monday night.

Bolton told ABC News Chief White House Correspondent Jonathan Karl that he was never asked to resign -- that his departure was on his initiative, not the president's.

"I offered to resign last night," Bolton said. "He never asked for me to resign directly or indirectly. I slept on it and resigned this morning."

Bolton told Karl he resigned because an "accumulation of things" and it was "flatly wrong" to say the president wanted his resignation letter on his desk Tuesday morning.

The White House stood by the president's tweet that he asked for Bolton's resignation Monday night and that a brief resignation letter was delivered Tuesday morning.

White House press secretary Stephanie Grisham told reporters outside her office in the West Wing that she was not aware of the president and Bolton talking Tuesday morning.

Grisham said there was no final straw in Bolton's departure but that he and the president had a number of broader policy disagreements. Asked if recent news leaks over the internal disagreements played a role in Bolton's dismissal, she said they did not.

Grisham declined to talk about who might permanently replace Bolton in the job and whether there would be other departures from within the National Security Council, saying it was too soon to say. She added that she would not get ahead of the president in making an announcement about his replacement, which the president said will come next week.

In the meantime, White House officials said Charlie Kupperman, who served as deputy national security adviser under Bolton, will take his place in an acting capacity until a permanent replacement is named.

Bolton was scheduled to appear at a White House briefing early Tuesday afternoon with Secretary of State Mike Pompeo and Treasury Secretary Steve Mnuchin to discuss a counter terrorism executive order, but it quickly turned into them fielding shouted questions from reporters about Bolton and the contradictory statements about his departure.

At the briefing, Pompeo said, "The president is entitled to the staff that he wants," adding, "he should have people he trusts and values."

"When the president makes a decision like this, he's well within his rights to do so," he said."

Pompeo, long at odds with Bolton over policy, acknowledged their differences, most recently over the president's decision to host the Taliban for talks at the presidential retreat in the Maryland mountains, Camp David.

"Many times Ambassador Bolton and I disagreed, that's to be sure," Pompeo said, "but that's true for lots of people with whom I interact."

But when asked specifically which policies the president and Bolton took issue with, Pompeo punted to the White House.

Mnuchin then chimed in: "The one thing I would just say followup because the president has been clear on this, the president's view of the Iraq war and ambassador Bolton's was very different and the president made that clear."

Often in disagreement with the president, Bolton, sporting his trademark mustache that Trump reportedly derided, had a reputation as a foreign policy hawk, and in May Trump said he at times had to temper him.

"John's very good. He has strong views on things which is OK. I'm the one who tempers him, which is OK. I have John Bolton and I have people who are a little more dovish than him," Trump said.

In June, Trump said, "John Bolton is doing a very good job, but he takes a -- generally, a tough posture. But I have other people that don't take that posture. But the only one that matters is me because I'll listen to everybody...."

In January, the president addressed reports of conflict between Bolton and Pompeo.

"I have two great stars. And John Bolton is doing a great job, and Mike Pompeo is doing a great job. They're very strong and they work hard. And, as you know, they're doing things that are very -- very good. We're coming up with some very good results," the president said.

Bolton and Pompeo disagreed strongly over how to handle North Korea, with Bolton opposing talks in general even though Trump has put great stock in his relationship with Kim Jong Un. Pompeo has traveled to North Korea to facilitate the two Trump-Kim summits and their DMZ meeting in June. Bolton was traveling in Mongolia at the time.

Before joining the administration, Bolton wrote an op-ed advocating for a preemptive strike on North Korea.

The two men also differed over how to deal with Iran. Bolton had recommended that Trump order a military strike against Iran after it downed a U.S. drone, which Trump canceled at the last minute. Trump and Pompeo are open to talks with Iran's President Hassan Rouhani, something Bolton opposed, advocating instead for more pressure and sanctions on Tehran.

Reacting to Bolton's departure on Capitol Hill, GOP Sen. Lindsey Graham, R-S.C., speculated that Bolton's opposition to the president meeting with the Taliban at Camp David this past weekend, as Trump said he had proposed until canceling the meeting, may have been a tipping point.

"I like John Bolton. I think he sees the world for what it is. I've always had a similar view of the threats that we face. But the personal relationship between the president and the national security adviser is important, I think the view that there's some public discussions about Bolton being on the other side of meeting with the Taliban probably was a bridge too far," Graham told ABC News Senior Congressional Correspondent Mary Bruce.

"I don't know what happened there but the bottom line is I appreciate what John has done for the country for a long period of time and the president will now get a chance to pick a national security adviser he has more confidence in," Graham said.

One of Bolton's closest Republican friends in Congress, Sen. Jim Inhofe, chairman of the Senate Armed Services Committee, said: "I'm disappointed that that association has been dissolved."

Other Republicans were glad to see him go. GOP Sen. Rand Paul, R-Ky., was quick to tweet "I commend @realDonaldTrump for this necessary action. The President has great instincts on foreign policy and ending our endless wars. He should be served by those who share those views."

Democrats, on the other hand, wanted more information about what led to this decision.

"Bolton was President Trump's third national security adviser," Sen. Chris Coons, D-Del., told Bruce. "I think there's a lot we need to know about what caused this abrupt firing by tweet of the president national security adviser, what the policy differences were, and what this means about stability, America's place in the world, and the decision making team that surrounds our president."

Coons went on to raise concerns about the implications of all this turnover.

"I think these abrupt changeovers in his leadership team, while they might make for great television, and they might work well on a TV show where your signature line is 'You're fired!,' doesn't make for predictable or steady management of the senior levels of the administration," he said.