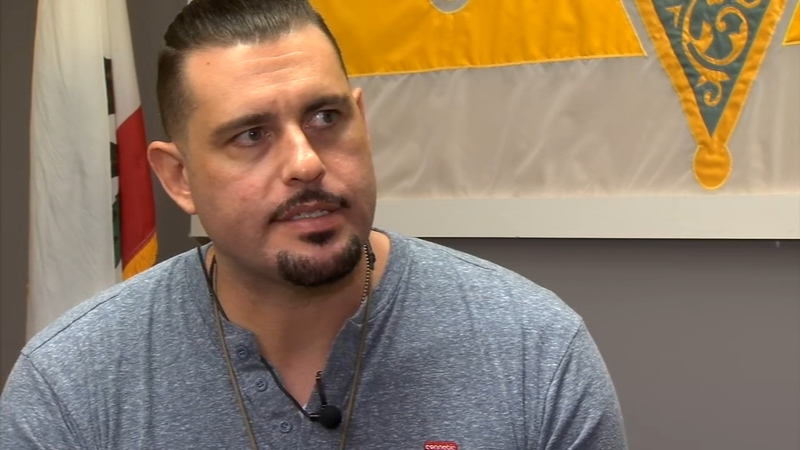 MERCED, Calif. (KFSN) -- Sgt. Clint Landrum has remarkably hardly missed a beat since being shot at a property in Dos Palos exactly one week ago.

He went there with three other members of the Sheriff's Tactical and Reconnaissance, or STAR, team to arrest Guadalupe Lopez-Herrera on domestic violence charges.

RELATED: Guadalupe Lopez-Herrera shot at woman's home while attempting to attack wife over the weekend

Landrum and Deputy Julio Ibarra were moving into position through an irrigation ditch when he was suddenly struck by gunfire.

"Immediately recognized what was going on, and the first one kind of took my breath away, but then the second one to the leg put me down," Landrum said.

He later discovered the first bullet hit one of the handgun magazine pouches on his vest, blowing it apart, but leaving him unscathed. The second bullet left a graze wound and a large bruise on his right thigh.

Landrum managed to crawl to safety and even joined the chase for the suspect until he was ordered to pull over and be treated.

"After I got in the ambulance, I called my wife, and the first words out of my mouth were I'm OK, don't freak out, don't be worried," he said.

But Landrum himself was worried about all of his colleagues from across the state who swarmed the area to search for the suspect.

"It was amazing and humbling to see the response, and at the same time a lot of my dear friends, a lot of my best friends in my career and in my life are going after this guy, so I was nervous and hopeful that nothing else would happen," he said.

Authorities say Lopez-Herrera fired at a CHP sergeant during a pursuit through Fresno County the next day, but no one else was hurt leading up to his arrest on Interstate 5 near Kettleman City.

Landrum said he's relieved to have the suspect off the streets, and he credits God and a special guardian angel for keeping him alive.

"My mom passed away a year and a half ago. She lost a battle with cancer, and it was actually her birthday so I think mom maybe had something to do with it, I don't know," he said. "It's just one of those things that it makes you appreciate everything a little more, it's a reminder again of why we do what we do."

Sgt. Landrum also addressed the fact that the suspect is in the country illegally. He said he does not want this shooting to fuel divisive political arguments.

He does believe that undocumented immigrants who commit violent crimes in the U.S. should be deported, but he does not care about immigration status when it comes to serving this community as a deputy.