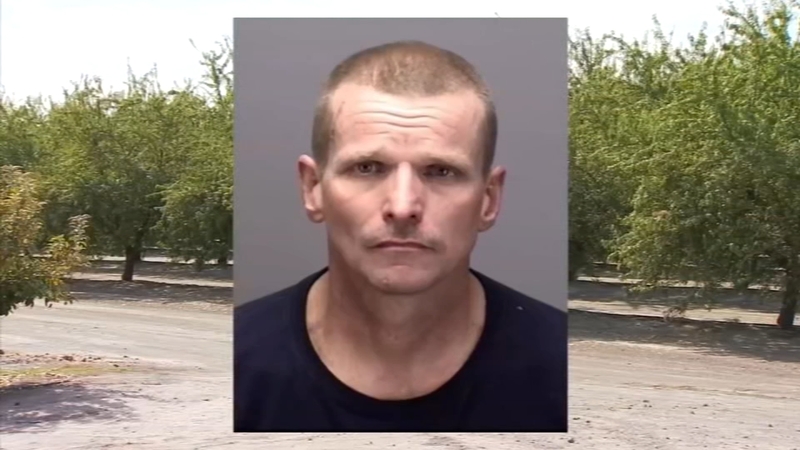 MERCED COUNTY, Calif. (KFSN) -- An elderly North Valley couple is sharing their story after a man stole their car from a church parking and then showed up at their house while they were inside.

Authorities were concerned this situation could have turned into a home invasion robbery, but instead, it had a much happier ending with the couple getting their car back, and the suspect being booked into jail.

Barbara Parreira is feeling blessed to have her trusty 2011 Chevy Malibu safely at home after it was stolen from the parking lot of her Los Banos church on Wednesday morning.

"We go to mass at St. Joseph's every morning, 7 o'clock parked the car like I always do, and when I got out the car was gone," she says.

Her husband Louis had driven separately so he could head to coffee with friends afterward so they jumped in his truck and went to the Los Banos Police Department. That's where they remembered the car is equipped with OnStar. Officers started tracking the suspect with the company's help and saw that he was heading toward the couple's rural Merced County home after finding their address on documents in the vehicle.

The sheriff's office responded in full force with a helicopter, several deputies, and a lieutenant joining the police chief and his officers at the property. Authorities searched the area and found 44-year-old Rickey Renslow hiding in the couple's orchard.

"We were amazed because we felt how fortunate we were that they got him so quickly because he had our house key, and I'm sure that's what he intended to do."

The couple's car had a large scratch and some other minor damage, but the Parreiras say they're grateful that God and their local law enforcement agencies were watching over them.

"They know we're up in age, and they wanted to know if we're okay, and I was very impressed and very pleased," says Louis Parreira.

Sheriff Warnke says, "Everything worked out well. They were in church, and apparently, when they were praying it worked because we got everything done."

Mrs. Parreira was so thankful that she baked cookies for the first responders, and her husband delivered them to the sheriff's office. As for the suspect, he's being held in jail on a $40,000 bond for one count of stealing a vehicle.
Report a correction or typo
Related topics:
los banosmerced countyhome invasionmerced countyrobberycarjacking
Copyright © 2021 KFSN-TV. All Rights Reserved.
More Videos
From CNN Newsource affiliates
TOP STORIES