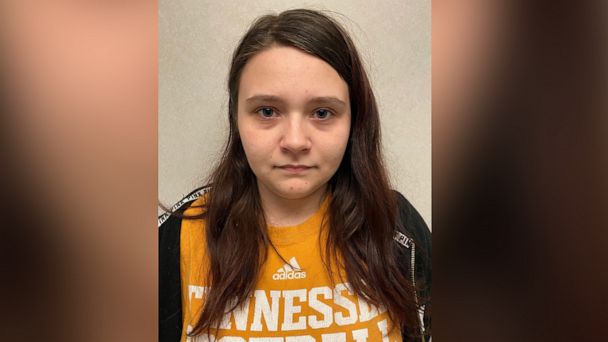 Authorities in Tennessee have arrested the teenage mother of a missing 15-month-old girl on a false reporting charge.

The Sullivan County Sheriff's Office said its deputies took 18-year-old Megan "Maggie" Boswell into custody on Tuesday night and charged her with one count of false reports, after she allegedly gave investigators inaccurate information amid the desperate search for her young daughter, Evelyn Mae Boswell, who was declared missing last week but was reportedly last seen by family members in December.

The mother, who has full custody of Evelyn, was cooperating with authorities but had provided detectives with "a number of conflicting statements" during the course of the investigation, according to a statement from the sheriff's office. A further inquiry revealed that some of the information she gave was "false," the sheriff's office said.

"Every time we talk to her, her story changes," Sullivan County Sheriff Jeff Cassidy told reporters in a news conference Wednesday afternoon. "And I'm serious when I say that. Every single time."

The false statements have delayed and impeded the investigation, Cassidy added.

The young woman is being held in the Sullivan County Jail on a $25,000 bond, according to the sheriff's office. It's unclear whether she has obtained a lawyer.

Evelyn's father, Ethan Perry, who is on active duty in the U.S. military, stationed in another state, has been cooperating with police.

The sheriff's office continues to work alongside the Tennessee Bureau of Investigation and the FBI to find Evelyn, who became the subject of a statewide Amber Alert issued on Feb. 19. Investigators have received more than 500 tips, but none have produced any credible sightings regarding the toddler's whereabouts so far.

It's unknown why it took so long to report the child missing.

Authorities have followed up on more than 500 tips and are currently treating the investigation as if Evelyn is still alive, Cassidy said.

Last Friday, authorities located a vehicle in North Carolina's Wilkes County that they were searching for and two individuals inside whom they wanted to speak with about the case. Angela Boswell, 42, and her 33-year-old boyfriend, William McCloud, who are both Tennessee residents, were questioned as part of the ongoing investigation and are currently being held on charges unrelated to Evelyn's disappearance, according to the Tennessee Bureau of Investigation.

The couple were arrested and charged with possession of stolen property, as the vehicle they were traveling in had been reported stolen, according to the Wilkes County Sheriff's Office. It's unclear whether either have obtained legal representation.

Evelyn, who is white and has blonde hair and blue eyes, was last seen wearing a pink tracksuit with pink shoes and a pink bow in her hair. She is about two feet tall and weighs 28 pounds, according to the Tennessee Bureau of Investigation.

Anyone with information regarding Evelyn's whereabouts is urged to contact the Sullivan County Sheriff's Office at 423-279-7330 or the Tennessee Bureau of Investigation at 1-800-TBI-FIND.