Coronavirus tests are pending for two inmates at the Fresno County jail, but new protocols may have kept the virus out even if those inmates have the virus.

Just behind the sally port gates is where they try to stop any illnesses before they get into the jail population.

The medical staff at the jail will actually triage any arriving inmates and make sure anyone with symptoms goes to the hospital instead of the jail.

"If they don't pass, they immediately go to the hospital from there," said Fresno County Sheriff's Office spokesman Tony Botti. "If they do pass then they get to pass through into the booking facility."

The two sick inmates never made it into booking.

But jails and prisons are a big concern across the state because of the potential for quick spread.

"We have pods, you know, where you have, say, 72 inmates all living together in more of a confined space," Botti said.

The state prison system has one prisoner housed in L.A. and four employees - in Chino, Folsom, and Sacramento -- who have tested positive.

Infectious disease specialists worry that once the coronavirus gets into the general population at a jail or prison, it won't be easy to contain there.

Employees could go home and into the community. Some inmates have release dates.

Fresno County closed for everything except a few emergency hearings Monday and through April 3.

Ashjian cheered the move, but warned it won't be enough.

"I want people to understand it's just a brief reprieve," she said. "If no other measures are taken then in two weeks we're going to see even more crowded courtrooms because of all the cases from these two weeks."

For now, though, the courts are almost empty and the jail is almost full.

Botti, the sheriff's spokesman, says they're listening to the recommendations and preparing a plan for the worst case scenario, but hoping it'll never be put to use. 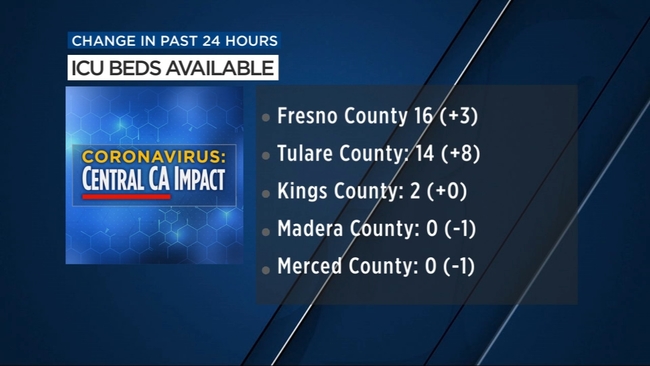 Man killed in solo-car crash on Highway 41 near Ashlan Ave.