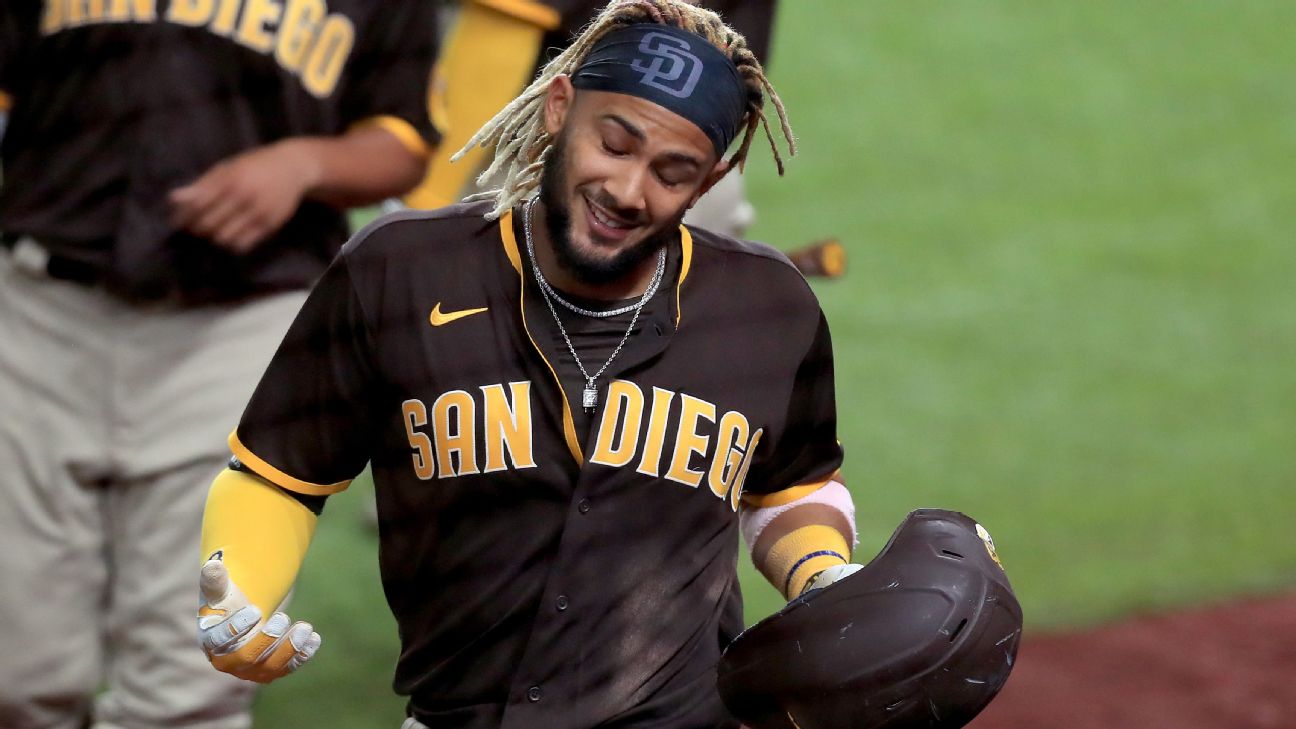 I thought we were over all this stuff.

If Jose Bautista's home run and bat flip in the 2015 playoffs was the zenith of baseball's culture wars and "play the game the right way" zealots, it seemed we had come around on the issue. Starting in the 2018 postseason and continuing into 2019, MLB even ran an advertising campaign featuring Ken Griffey Jr. imploring to "Let the kids play."


Two incidents from Monday night, however, suggest that what might be termed an old-school belief retains a strong footprint in the game. In the eighth inning of the Padres-Rangers game, Fernando Tatis Jr. swung at a 3-0 cookie with a 10-3 lead and belted a grand slam off Rangers reliever Juan Nicasio. Tatis had missed a take sign, but the Rangers clearly didn't like the swing with the Padres holding such a big lead. Ian Gibaut, a pitcher with all of 24 career innings in the majors, replaced Nicasio and threw his first pitch behind Manny Machado's head.

"I didn't like it, personally," Rangers manager Chris Woodward said of Tatis' 3-0 swing. "But, like I said, the norms are being challenged on a daily basis. So just because I don't like it doesn't mean it's not right. I don't think we liked it as a group."

Meanwhile, in the Nationals-Braves game, Juan Soto clubbed a 445-foot ninth-inning home run off Braves reliever Will Smith to give the Nationals a 6-3 lead at the time (the Braves would rally to win in the bottom of the ninth). Soto admired his home run for a second or two -- certainly not as long as he has admired some of his other blasts -- and Smith then barked an expletive at Soto, which only led to an even slower trot around the bases.

Nationals manager Dave Martinez defended his young superstar after the game. "Will Smith said something to Soto that I didn't really appreciate," Martinez said. "So I just want to let him know, hey, it wasn't Juan who threw the ball. His job is to hit so just be quiet and get on the mound. You threw the pitch, make a better pitch."

As Buster Olney and I discussed on the Baseball Tonight podcast this morning, that's the bottom line here: Throw a better pitch. Just because you're down seven runs doesn't give you the right to throw a 3-0 fastball down the middle and expect an easy strike. Tatis' job is to beat you -- no matter the score, no matter the count. Soto's job is to beat you -- and if, god forbid, he has some fun in the process and you don't like it, take Martinez's advice.


Former Astros pitcher Collin McHugh, who opted out of playing in 2020, had a good tweet on Tatis' home run:

Tatis was conciliatory after the game. "I've been in this game since I was a kid," he said. "I know a lot of unwritten rules. I was kind of lost on this. Those experiences, you have to learn. Probably next time, I'll take a pitch."

Former big league pitcher Ron Darling, now an analyst for the Mets and MLB Network, addressed the trouble with the unwritten rules on MLB Network and defended Tatis. "I'm old enough that I grew up in a game that a lot of older guys had all the power and they would tell you how to act, what to do, and you did what they told you to do because that's how it was," he said. "Unwritten rules only work if everyone knows the unwritten rules. By their very definition, nobody knows an unwritten rule, so what you have now is you're trying to make a decision that a 3-0 count in a seven-run game is off limits. I'm just not with that at all."

It is all kind of silly. If Tatis had crushed a first-pitch fastball or even a 2-0 fastball, nobody would raise an eyebrow. But because it was 3-0 he has somehow, what, destroyed the integrity of the game? Hurt Juan Nicasio's feelings? This isn't Little League. He's trying to compete, to drive in runs, to hit home runs. Sure, a seven-run lead with two innings to go is pretty safe, but you never know. The Giants just blew a five-run lead in the ninth inning the other night.


The argument might be that Tatis endangered his own teammate. That only gets back to the circle of beanball baseball. Gibaut may have endangered his teammates by throwing behind Machado. What if the Padres had retaliated by throwing at a Rangers hitter? As for Soto, obviously some of his antics at the plate rub opponents the wrong way -- the shuffle, the cup adjustments, the air of confidence that does admittedly border on cockiness. It's important to understand the cultural aspects here, however. Tatis and Soto are both Dominican, and Latin players often do play the game with more flair -- no different than, say, the Korea Baseball Organization, where bat flips are almost an artistic aspect of the game.

"He means nothing by what he does," Martinez said of Soto after Monday's game. "When he does his shuffle, it's just to get him to the next pitch. He doesn't do it to show anybody up, he doesn't do it -- when pitchers start acting the way they're acting, it does bother me. But he doesn't do anything back. He stands up there and he gets a good pitch to hit and he hits the ball really hard. That's what you're supposed to do."

That's what both Tatis and Soto have been doing. Both are just 21 years old and yet emerging alongside Mike Trout as two of the best hitters in the game and as generational-type players. Tatis is hitting .305/.383/.726 and leads the majors in home runs (11), RBIs (28), runs (22) and total bases (69). If the MVP vote were held today, he'd likely be the landslide winner. Soto missed the start of the season with a positive COVID test, but in his 12 games he's hitting an absurd .409/.490/.955 with seven home runs and more walks than strikeouts. When he debuted in 2018 at 19 with a .406 OBP, his approach and plate discipline led to Ted Williams comparisons. With this start, he's showing that's not a crazy proposition.

So, yes, let the kids play. Let them swing 3-0. Let them admire their home runs. And opponents had better get to used to it because they're going to hit a lot more of them. 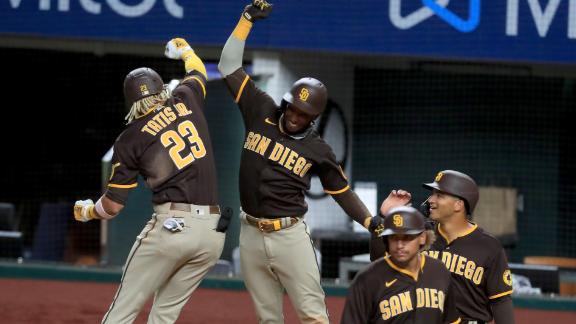