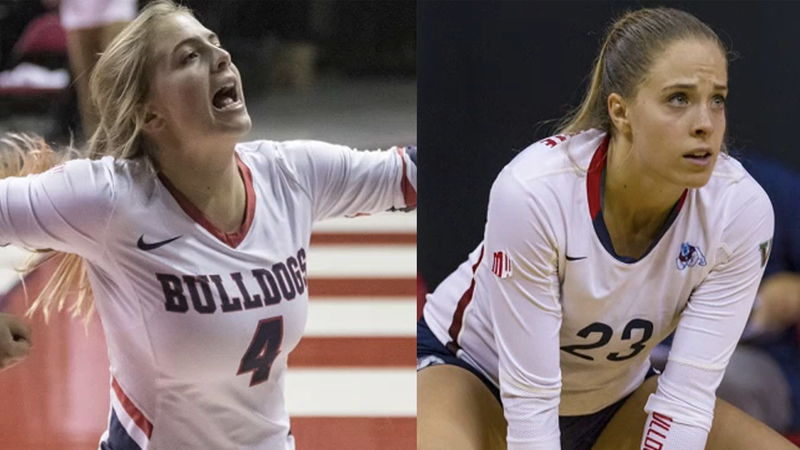 FRESNO, Calif. (KFSN) -- The Eppright last name is etched in the history books at Fresno State. Maggie set program records for the Dogs' before she became an assistant coach for the volleyball team.

Three years later, her younger sister has followed in her footsteps and is now trying to leave her own mark on the program.

"When I was younger, I never realized how good of a volleyball player she was until she went to Fresno State, and then I was like, wow, this is crazy," Molly said.

Molly and Maggie Eppright aren't your traditional sisters. I don't just mean their extremely gifted on the volleyball court, but they actually got along growing up.

"We played roof volleyball all the time," Maggie said. "My mom used to make fun of us, like I never got along this well with my sister, how are you guys so close. When something is that important to you, and such a big part of your life, getting to share it with someone like Molly when we're so close is really fun."

Each Eppright played collegiate sports. Their parents both played tennis, while their brother played golf at Cal Poly.

"Super competitive household, dinners got pretty ruthless, we would just play games and it would turn into a battle," the sisters said.

Natives of San Luis Obispo, Maggie attended Fresno State from 2013-2016. During her time as a Bulldog, she broke a series of records, including the most career digs, and set the single-season program record with 575 digs.

Her success on the court is what led her younger sister to quit gymnastics and start playing volleyball.

"It kind of caught us all by surprise," Maggie said. "She was a two-time all-around state champion. We were just assuming that is was something she was going to take off with."

The sisters loved watching each other's games. Molly said every weekend, she would get so excited to drive to Fresno and visit Maggie.

"I'll never forget she was a freshman in high school, and we had just lost a five-set match and I was super upset," Maggie said said. "I come into the crowd and she sprinted down to the front and was like, 'Maggie, I just made varsity.' Everything I was feeling just dropped off. Getting to watch her fall in love with the game when I was in college was pretty cool."

Maggie joined the Bulldogs coaching staff in 2018. Molly began her freshman campaign a year later. Maggie had coached her younger sister in club when she was younger, so the player-coach dynamic was nothing new to them.

"The first time we traveled was to Wisconsin, we were like, we haven't been on a plane together since we were like six years old," Maggie said. "We're doing all these new things, but together, I think it's really cool. Getting to watch her progress, and see her have the same struggles that I did and see the same peaks and valleys all that. I think our brother must hate that we love volleyball so much because it's all we talk about in our household."

Despite the pair's close bond, they are completely different people.

"I would describe her (Maggie) as serious, but she's to the point and comes off as serious," Molly said. "I (Molly) come off like, 'Hi, how are you?' so people describe Maggie as the serious one and Molly is the happy one.

"I've always been labeled as intense, Molls is a lot softer around the edges," Maggie said. "I think it's an oldest sibling, youngest sibling thing, not totally sure. "

Molly's sophomore season will have to wait till 2021, but her sister says the down time allows her to explore other opportunities.

"We are looking forward to a season of gratitude, and enjoying playing the game again," Maggie said said. "Controlling the controllable's is what we can do right now. Spending some time looking at towards some different things, what do you want to do when you grow up, getting to explore some different parts of their lives."

"I've been focusing on watching film and getting strong," Molly said. "I think what I've learned from all of this is don't take anything for granted because who knows when we're going to play volleyball again. But when we get back I'm going to go all out, so you watch out, Maggie."