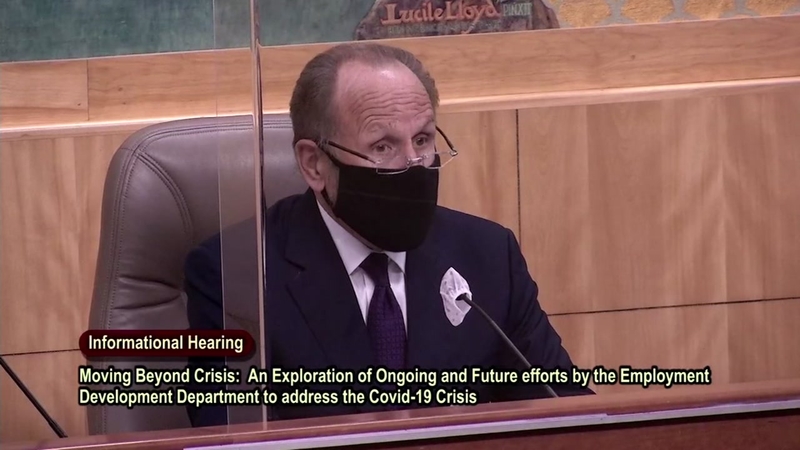 While Sen. Hill praised the efforts of EDD's managers and employees during the pandemic, he also stated that "some Californians have had their benefits unfairly delayed or denied, which is totally unacceptable."

EDD officials reported that a new ID verification system is now in place. But lawmakers said EDD has barely put a dent in a backlog of 1.6 million claims that go back as far as June - and won't get cleared up until next year, leaving many folks still waiting for benefits.

The EDD reported it has dozens open fraud cases going on, but the director said the EDD has no idea how much it has paid out to scammers. Some legislators think it's in the billions.

ABC7 News' 7 On Your Side has learned exclusively that more local charges are likely to be filed in the unemployment benefits scam. Some of those suspected of taking part in this scheme are in our prisons.

Unemployment benefits are still out of reach for many Californians who are out of work. While legitimate workers can't get benefits, officials say the EDD has paid at least $250,000 in benefits to inmates running a scam inside a San Mateo County jail.

Eight suspects are accused of taking part in this scam while serving time at San Mateo County's Maguire Correctional Facility. Another is serving a 50-years-to-life sentence for murder at Corcoran State Prison. One is in San Francisco County jail, and another in California State Prison Sacramento. The San Mateo County District Attorney's office in August charged those 11 inmates, and 10 others, with 17 counts of conspiracy to commit fraud.

Three of the defendants have pleaded no contest and have received sentences ranging from 16 months to 4 years and eight months in state prison.