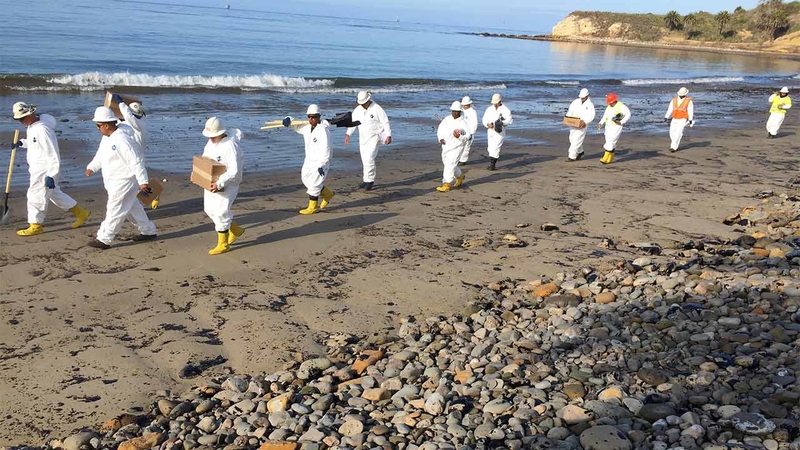 The spill started out spanning about four miles, but it has since spread to cover approximately nine miles of coastline, U.S. Coast Guard Capt. Jennifer Williams said at a news conference Wednesday.

Initial estimates put the spill at about 21,000 gallons, but Williams did not have an official number as to how much oil actually spilled into the water. The cause of the pipeline rupture is under investigation by the Environmental Protection Agency.

Cleanup crews hit the beach starting at 8 a.m., scooping up the globs of oil-covered seaweed and sand.

Three vessels are on the water, cleaning off the water from the surface, and another six vessels are trying to corral the oil to keep it from spreading.

"Oil recovery tends to be a complicated process that involves a lot of manual labor and taking environmental factors like wind, currents and weather into consideration. It can be a slow process, but we want to make sure that we do it right so we can get the beaches back to its pristine condition

PHOTOS: Refugio State Beach oil spill
A ruptured pipeline spilled oil at Refugio State Beach, 20 miles west of Santa Barbara on Tuesday, May 19, 2015.
So far, 850 barrels of oil have been recovered from the ocean. It remains unclear how long the cleanup will take.

The oil came from a ruptured 24-inch pipeline on the north side of the 101 Freeway near Refugio State Beach, about 20 miles west of Santa Barbara. The break was discovered by a civilian who reported it to authorities around noon Tuesday.

The pipeline, which is owned by Santa Maria-based Plains All-American Pipeline, was shutoff about three hours later.

The Coast Guard, county emergency officials and state parks officials were cleaning up the spill. Boats from the nonprofit collective Clean Seas also were providing help but were having trouble because so much of the oil was so close to the shore, Williams said.

Photos from Santa Barbara-based online news website Noozhawk showed birds caught in the muck. However, officials did not have a count on how many animals were injured or killed following the spill.

Refugio State Beach is closed, as is the beach-side campground. That shutdown is expected to last through the upcoming Memorial Day weekend.

The California Department of Fish and Wildlife closed fishing and shell fish harvesting in Santa Barbara County from one mile west of Refugio State Beach to one mile east of the beach at the recommendation of the Office of Environmental Health Hazard Assessment.

The accident occurred on the same stretch of coastline as a 1969 spill that at the time was the largest ever in U.S. waters and is credited for giving rise to the American environmental movement. Several hundred thousand gallons spilled from a blowout on an oil platform and thousands of sea birds were killed along with many marine mammals.

The stretch of coastline is home to offshore oil rigs and small amounts of tar and seepage regularly show up on beaches.

The spill is largest in years and the Santa Barbara-based Environmental Defense Center said to have it occur in "a sensitive and treasured environment is devastating to watch." The group expressed special worry for the many species of whale that migrate through the area.