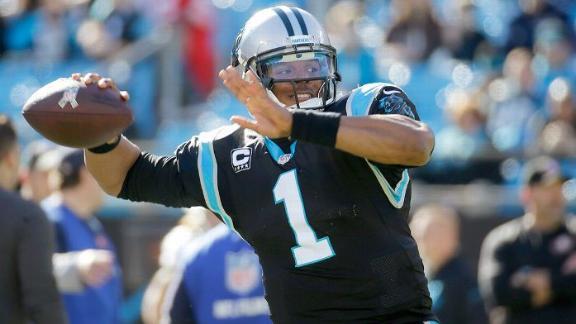 CHARLOTTE, N.C. -- Panthers quarterback Cam Newton won't have the help of his head coach when it comes to winning the "Madden NFL 15" cover vote.

"I'm trying to avoid the jinx,'' Rivera said with a smile.

Being on the cover of the video game hasn't been kind to many of those who have graced it. There's a solid history of the player selected either getting hurt, seeing a noticeable decrease in production, or his team having a bad season.

And sometimes all three happen.

Among the more notable years (note: the cover year is a year ahead of the season):

• Minnesota Vikings quarterback Daunte Culpepper (2002): He threw 23 interceptions and saw his 2001 season end in the 11th game with a back injury a year after throwing for almost 4,000 yards and 33 touchdowns.

• St. Louis Rams running back Marshall Faulk (2003): After five consecutive seasons with at least 1,000 rushing yards, he  missed five games in 2002 with an ankle injury and never rushed for 1,000 yards again.

• Atlanta Falcons quarterback Michael Vick (2004): Less than a week after the cover was released, Vick suffered a broken leg in a preseason game. He played in only five games and had just 585 yards passing and four passing touchdowns. The Falcons went 5-11.

• Philadelphia Eagles quarterback Donovan McNabb (2006): The year after leading Philadelphia to the Super Bowl, he missed seven games due to injuries and failed to make the Pro Bowl for the first time in five years.

• Cleveland Browns running back Peyton Hillis (2012): After a breakout year in which he rushed for nearly 1,200 yards, he rushed for 587 yards and three touchdowns in 2011. He played in only 10 games and started only nine due to injuries and illness.

There are others, but those were enough to convince Rivera not to risk pushing Newton over the top in the voting. He believes his quarterback has enough to keep him busy, as he recovers from offseason ankle surgery.

Newton was not on the field for Wednesday's organized workout, staying inside to run on the underwater treadmill and undergo other treatments that are a part of his rehabilitation. But Rivera said his franchise quarterback is on or even ahead of the four-month recovery schedule. He still didn't rule Newton out for minicamp June 17-19, noting the first pick of the 2011 draft did some more throwing earlier in the week.

But Rivera wasn't any more comfortable voting on Newton for the Madden cover, which will be announced Friday (at approximately 7:30 p.m. ET) on "SportsCenter," than he would be playing Newton in the video game.