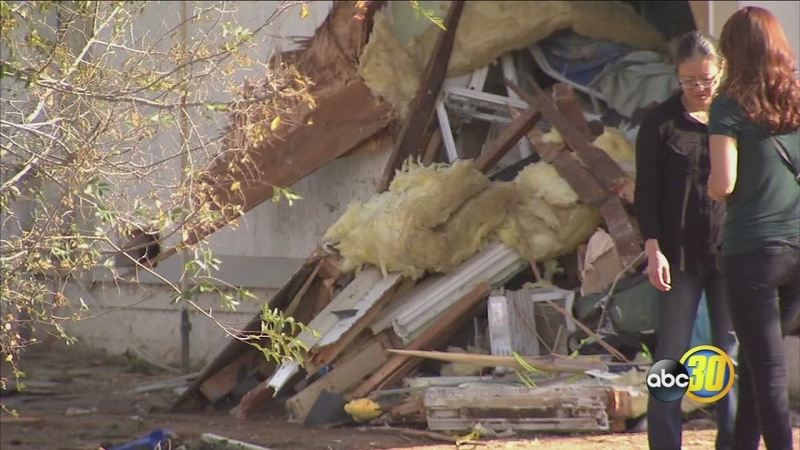 MADERA, Calif. (KFSN) -- Authorities say that at 9:20 Saturday morning a 36-year-old man was driving his truck southbound on Road 37.

He had a medical emergency causing him to drift into the other lane -- entered the shoulder and then hit a propane tank. The tank then launched the car into the garage of a home that was converted into a bedroom.

"There was two children ages 11 and nine sleeping in the room on a bunk bed. The truck landed on top of the children," said CHP Officer Rafael Rivera.

Anthony Lopez was driving by the area and witnessed the aftermath.

"I get outside and I everybody panicking and I see cars getting off the driveway and I see everybody crying and say hey, is everything ok and they said no, somebody is stuck," said Lopez

The nine-year-old boy was rescued by the fire department, but the 11-year-old boy named by his family as Tito was pinned under the truck -- he died and so did the driver.

CHP says the accident could have been much worse given the circumstances.

"It was a pretty chaotic when we all first arrived, it is a huge propane tank and it was still leaking, so you had the danger of the propane being lit and exploding," explained Officer Rivera.

With this tragedy friends and family are trying to do whatever they can to help the family in their time of grief.

Lopez said, "Really from the bottom of my heart I hope they make it through this and they all stick together as one because that's the only way you can get through something as tragic as this."
Report a correction or typo
Related topics:
madera countycar accidentchild death
Copyright © 2021 KFSN-TV. All Rights Reserved.
CHILD DEATH

Parents of drowning victim raise awareness to protect other children