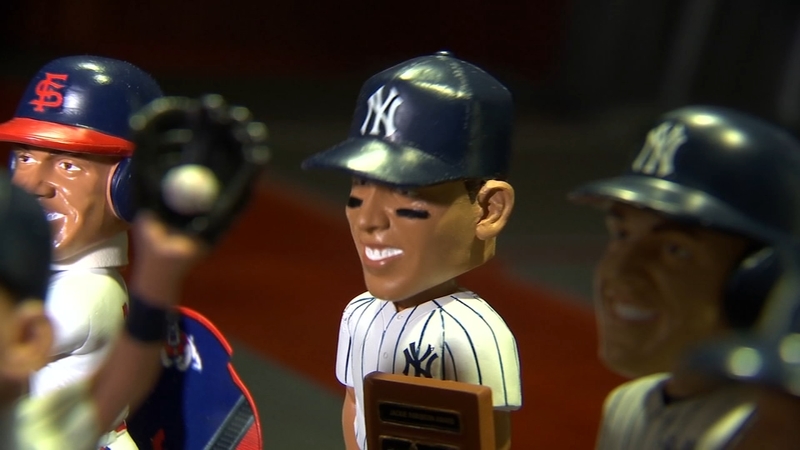 Only the top pros are popular enough to have their own bobblehead but right now former Fresno State standout Aaron Judge is head and shoulders above the rest of the sporting world.

All rise. All eyes on Aaron Judge's every move. Those moves are immortalized in 24 different bobbleheads. Right up there with LeBron.

Fans can't get enough of the New York Yankee slugger.

Phil Sklar is the CEO of the National Bobblehead Hall of Fame and Museum in Milwaukee. Sklar said, "Aaron Judge has been one of those once in a generation ballplayers. He has more bobbleheads than hall of famers, and he's only a year and a half into his career."

The bobbleheads all nodded in agreement: one needed to be made of Aaron as a Diamond Dog.

Sklar said, "Most players don't even get a major league bobblehead, but to have one in your college uniform is pretty cool."

It's not just the mammoth home runs. A recent game of catch with a young fan in the stands tells you all you need to know about Aaron Judge.

Matt Mossette of Mossette's Sports Cards explained, "His size, his attitude. He's just a good guy, and people gravitate towards someone like him."

Mossette said, "They're just really proud of him, and everyone has something great to say about him. It's just nice to see a positive athlete like that."

Aaron Judge won the home run derby last year. He'll be back to start in right-field in this year's MLB All-Star Game.

Sklar said many outlets sold out of Aaron Judge bobbleheads during the Christmas holidays last year.

You can look at the latest offerings here.