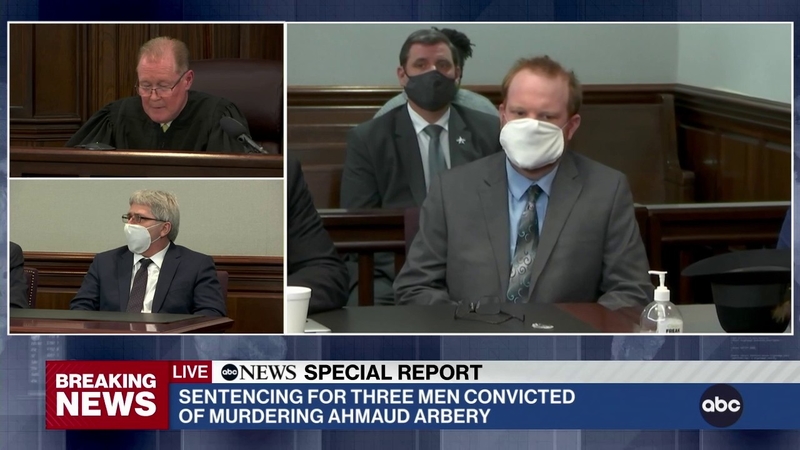 BRUNSWICK, Ga. -- Before he sentenced three men convicted of killing Ahmaud Arbery in south Georgia to life in prison, Judge Timothy R. Walmsley held a minute of silence Friday, saying he hoped to contextualize the time the 25-year-old spent being chased by the defendants.

"That one minute represents a fraction of the time that Ahmaud Arbery was running in Satilla Shores," Walmsley said, before going silent.

The pursuit of Arbery occurred for about five minutes, the judge said once he resumed speaking, as father and son Gregory and Travis McMichael and their neighbor William "Roddie" Bryan Jr. chased the 25-year-old Black man in their neighborhood outside Brunswick, Georgia.

The men believed Arbery had committed a crime in their neighborhood, they told police. The McMichaels were armed and gave chase, and Bryan later joined the pursuit, recording it from his pickup. Bryan's video shows Travis McMichael exiting his truck and confronting Arbery, who tussles with Travis over a shotgun before the younger McMichael fatally shoots him.

"I do want to put that time period in context, and the only way I could think to do so -- it may be a little theatrical, but I think it's appropriate," Walmsley told the court. "I want us all to get a concept of time. So what I'm going to do is, I'm going to sit silently for one minute."

Arbery's mother, Wanda Cooper-Jones, bowed her head during the silence, according to a pool reporter present in the courtroom. The silence was broken only by the sound of journalists typing, the reporter said.

"When I thought about this, I thought from a lot of different angles," Walmsley said, "and I kept coming back to the terror that must have been in the mind of the young man running through Satilla Shores."

Wanda Cooper-Jones spoke about the family's reaction to the verdict and what's next.

Walmsley drew attention for other comments he made earlier in the trial, perhaps most notably at the conclusion of the jury selection process. At the time, Walmsley said there appeared to be "intentional discrimination" when the chosen panel of 12 people included just one Black member.

The two-and-a-half-week selection process ended in mid-November with prosecutors accusing defense attorneys of disproportionately striking qualified Black jurors and basing some of their strikes on race.

While he ultimately ruled the case could go forward since the defense could provide "valid reasons, beyond race, for why the jurors were dismissed," Walmsley said, "This court has found that there appears to be intentional discrimination."