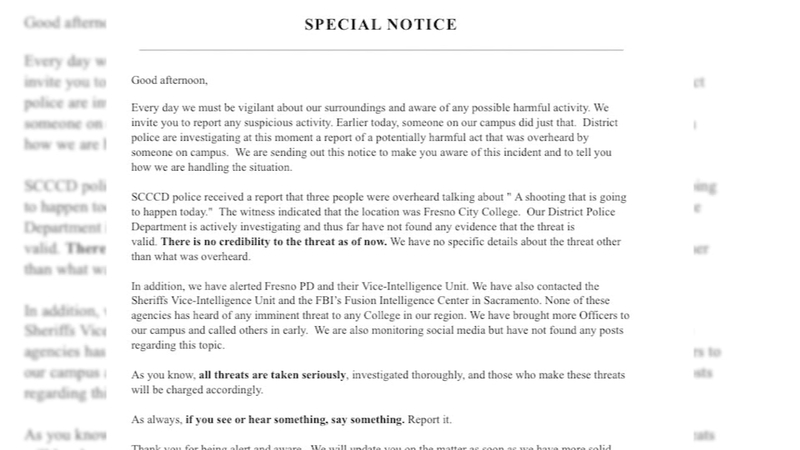 FRESNO, Calif. (KFSN) -- It's not the news thousands of Fresno City College students were expecting to hear as they started a new year.

"At first I was thinking something could've actually happened," said freshman Bernardo Valenzuela.

Students and administrators noticed a heavier police presence on Tuesday as investigators looked into a shooting threat made at the campus.

"We take these threats seriously, but wanted to see what this threat was," the chief said.

Students received emails from the school alerting them of an investigation, though authorities found the threat wasn't credible.

Valenzuela says while he thinks the scare was handled well, he would've liked information early on.

"Next time I prefer they send something like this was going to happen, so be cautious," he said.

However, Jennifer Tucker says her son was anxious after receiving the message but said he'd be marked absent if he didn't go to class.

"When I asked her my son may feel uncomfortable sitting in class and feeling anxiety, was there anything in place that would allow them to leave..she (the instructor) said no," she said.

Flores says because the threat wasn't deemed credible, they didn't cancel classes and notified students after the investigation was complete.