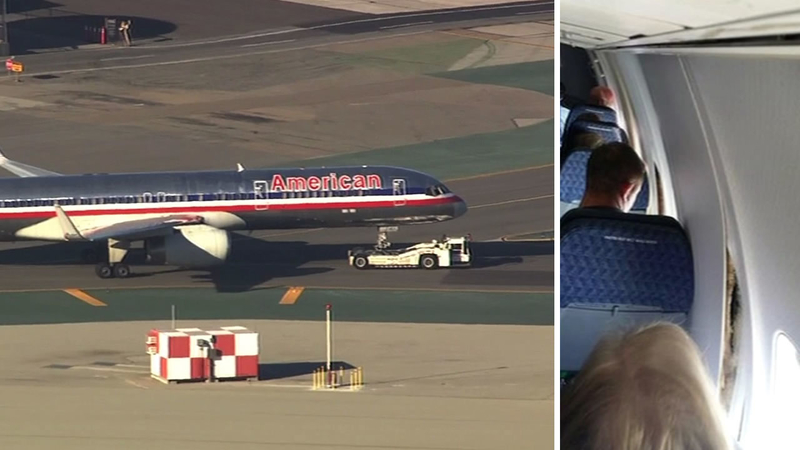 SAN FRANCISCO INTERNATIONAL AIRPORT -- An American Airlines jet bound for Dallas makes an emergency landing at the San Francisco International Airport when it looked like the inside of the plane was coming apart at the seams in midair.

A passenger caught a photo of the walls of the plane coming apart near the windows. Many of the passengers ABC7 News spoke to were feared the worst.

There were 184 passengers on board the flight. The FAA is investigating the bizarre incident and it wants to know what caused the walls of the plane to buckle during takeoff.

The American Airlines Boeing 757 was towed to a maintenance hangar at SFO after making an emergency landing.

It's a flight passenger James Wilson will never forget. He told ABC7 news, "All of the sudden we heard this loud pop, pop, pop, pop, pop really loud and a ripping sound."

Wilson heard the sounds just seconds after takeoff and thought the plane was breaking in two. He took a photo after part of the cabin wall on the sides and ceiling split apart near rows 14 and 15. You can even see exposed insulation near the window.

"It was terrifying; we didn't know what was going on. We were all shouting for the flight crew, 'Come, look, the walls are caving in!" Wilson said.

Flight attendants looked at the bucked walls and asked passengers if they could see cracks in the plane.

"They kept asking. To the gal sitting in front of me, I said, 'Look in there, do you see daylight?'" Wilson said.

After 45 minutes, the captain declared an emergency and told passengers he was returning to San Francisco.

"I was scared, I really was, and I wasn't sure if we were going to make it, but a little prayer," passenger Yvonda Little said.

A fire truck greeted the plane after a safe landing. American Airlines says the Dallas bound flight never lost cabin pressure, but they can't explain why the cabin walls popped. Some passengers were rebooked on other flights.