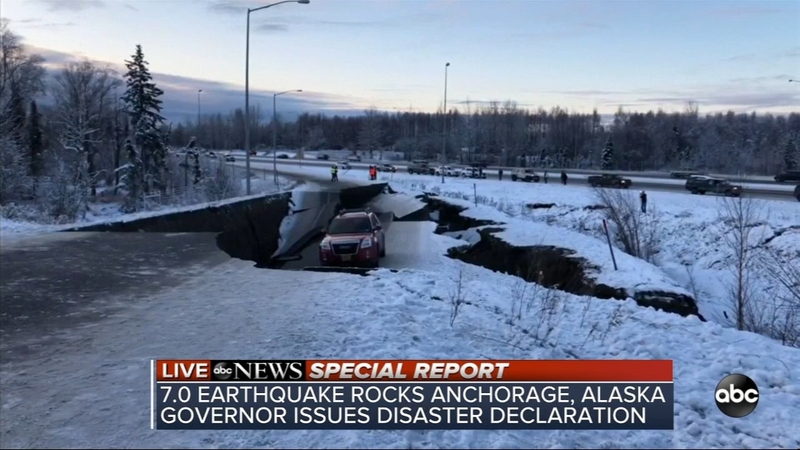 ALASKA -- The Latest on the earthquake in Alaska (all times local):

Officials have canceled a tsunami warning for coastal areas of southern Alaska following the 7.0-magnitude earthquake that shook Anchorage.

Officials monitored gauges to see if any underwater landslides would generate tsunami waves.

Because there were none, the warning was canceled.

Police had told residents of the island community of Kodiak to head to higher ground.

The quake damaged buildings in Anchorage and buckled roads and sent people running into the streets.

There were no immediate reports of serious injuries or deaths.

Police in Alaska's island community of Kodiak say residents are heeding advice to head to higher ground because of a tsunami warning issued after a 7.0-magnitude earthquake shook Anchorage.

Kodiak has about 6,000 residents and the city is about 250 miles (400 kilometers) south of Anchorage.

Senior center technician Michael Burgy says gauges are being monitored to determine if any underwater landslides have generated tsunami waves.

If there are none, the warning will be canceled.

The warning could be expanded if concrete data is received about waves that have been generated.

Brandon Slaton was alone and home and soaking in the bathtub when the Alaska earthquake struck.

Slaton just moved to Kenai, Alaska with his wife from Arizona and had never felt an earthquake before the 7.0 magnitude temblor hit on Friday morning.

Slaton says the quake created a powerful back-and-forth sloshing in the bathtub and before he knew it, he'd been thrown out of the tub by the force of the waves.

His 120-pound (54-kilogram mastiff panicked and tried to run down the stairs, but the house was swaying back and forth so much that she was thrown off her feet and into a wall and tumbled to the base of the stairs.

Slaton says: "It was anarchy. There's no pictures left on the walls, there's no power, there's no fish tank left. Everything that's not tied down is broke."

Slaton ran into his son's room after the shaking stopped and found his fish tank shattered and the fish on the closet floor, gasping for breath.

He grabbed the Betta fish and put it in another bowl.

He says the area was eerily quiet. His children, 11 and 16, were evacuated from school.

This version corrects that the earthquake happened Friday, not Tuesday.

Police in Alaska's Kodiak island community have told residents to head to higher ground amid the tsunami threat from the earthquake that rocked buildings in Anchorage, caused damage to roads and sent office workers running out to the streets.

Kodiak is an island about 200 miles (321 kilometers) south of Anchorage.

The U.S. Geological Survey said it was a 7.0-magnitude quake and tsunami warnings were issued for southern Alaska coastal areas.

Cereal boxes and packages of batteries littered the floor of a grocery store after the earthquake Tuesday morning that rocked buildings in Alaska's largest city, and picture frames and mirrors were knocked from living room walls.

Alaska averages 40,000 earthquakes per year, with more large quakes than the other 49 states combined.

Southern Alaska has a high risk of earthquakes due to tectonic plates sliding past each other under the region. According to the U.S. Geological Survey, the Pacific plate is sliding northwestward and plunges beneath the North American plate in southern Alaska, the Alaska Peninsula and the Aleutian Islands.

On March 27, 1964, Alaska was hit by a magnitude 9.2 earthquake, the strongest recorded in U.S. history, centered about 75 miles (120 kilometers) east of Anchorage. The quake, which lasted about 4 minutes, and the tsunami it triggered claimed about 130 lives.

Anchorage lawyer Justin Capp says he was getting ready for work when he felt the shaking start.

He grabbed on to the doorframe in the hallway and the door slammed into his hands, scraping his fingers and hand.

Capp says he's lived in Anchorage eight years and that Tuesday's quake was the worst he had experienced.

Another lawyer, Hank Graper, was driving when the quake struck. He first thought his vehicle had a flat tire, then thought it was exploding. He realized it was an earthquake after he saw traffic poles swaying.

Graper called it the most "violent" earthquake he's experience in his 20 years in Anchorage.

The U.S. Geological Survey initially said it was a 6.7 magnitude earthquake and later boosted the magnitude to 7.0

The National Tsunami Warning Center has issued a tsunami warning for coastal zones of southern Alaska following an earthquake that rocked buildings in downtown Anchorage.

The center said Friday that the warning was in effect for parts of the state's Cook Inlet and the southern Kenai peninsula.

The U.S. Geological Survey initially said it was a 6.7 magnitude earthquake and then reduced that to 6.6.

The quake was centered about 7 miles (12 kilometers) north of Alaska's largest city.

A 6.6 magnitude earthquake has rocked buildings in Anchorage and caused lamp posts and trees to sway, prompting people to run out of offices and seek shelter under office desks.

An Associated Press reporter working in downtown Anchorage saw cracks in a 2-story building after the quake. It was unclear whether there were injuries.