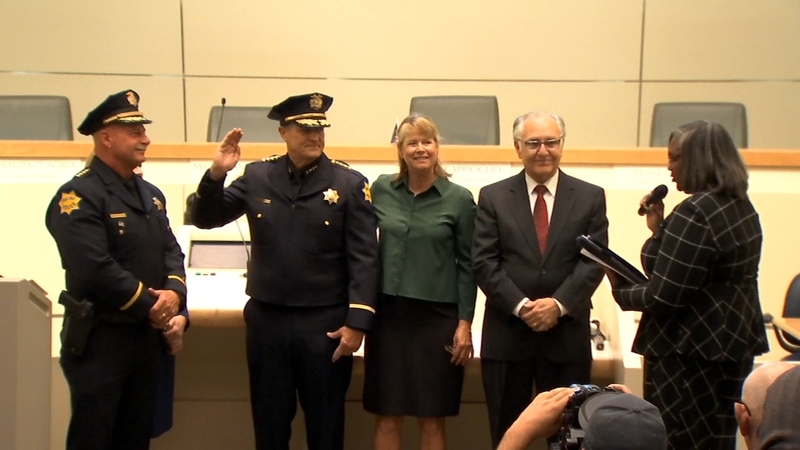 FRESNO, Calif. (KFSN) -- In a ceremony that was as much of a goodbye to former Police Chief Jerry Dyer, Fresno City leaders welcomed Andy Hall to the department's top position on Wednesday.

Hall served as acting chief for the past two months before he was officially sworn in at City Hall.

"You'll find that I'm a very hard worker, and I'll always have the community's interest before all others," he said at the ceremony.

Hall brings 40 years of experience to the job, holding many leadership positions in the department - including Deputy Chief since 2016.

He replaces Jerry Dyer after 18 years as the City's top cop.

"Don't be me, be yourself. That's what got you to where you're at today. I learned that from my predecessor, as well," said Dyer.

The new chief will lead more than 800 sworn officers and 200 civilian employees and will oversee a $200 million department budget.

Hall's vision is to take a more active role with community-based policing efforts and how Fresno PD deals with the City's younger generations.

"We really got to get into youth programs and start changing lives very early on before they get ingrained in the criminal justice system. I always like to say it's much easier to take care of it at the root than at the fruit by damaging the tree by just arresting the fruit," he said.

Hall's tenure as chief will be a short one.