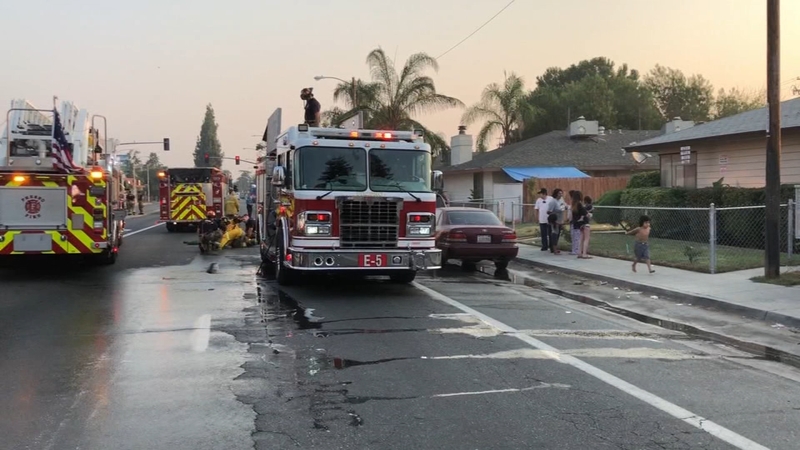 FRESNO, Calif. (KFSN) -- A resident took video of the orange flames that he walked out to around 6 a.m. on Thursday. Within minutes, the blaze that started in an alley spread to a nearby apartment complex.

"I heard the doorbell ring. I didn't think anything of it. But then he started knocking on the door really, really hard. So I got up really quick," said Jennifer Villareal.

Firefighters say the blaze at First and Clinton began in this dumpster and spread to nearby storage units and garages. pic.twitter.com/dEnWzaKG31

She was one neighbor who rushed to grab her kids and get out of her apartment. Firefighters say dumpster and trash fires in the area have become common- by the time they pulled up, no obvious suspects were around.

"When we arrived, there was no one in the area being in the early hours of the morning no one saw any suspicious activity so it is really tough for us to pinpoint the exact cause or origin," said Fresno Fire Department Cpt. John Creasy.

Flames ripped through several storage units where only blackened, charred, and melted items remained. Tuesday afternoon some residents rummaged through to see if there was anything salvageable.

One apartment was damaged by the flames and smoke.

An early morning fire on First and Clinton has left a family relocating. Fire fighters say a dumpster fire spread to an apartment complex damaging one unit and several garages. pic.twitter.com/DIr1Wx6WvR

"It was mostly exterior and we did have some electrical lines so with the operation of PG&E, we were able to isolate the electrical hazard and they will need to get power to their units so that's why they are being displaced," said Cpt. Creasy.

Firefighters are looking for any surveillance cameras in the area that show that part of the alley.

Residents who have to leave temporarily are grateful the fire did not destroy more.