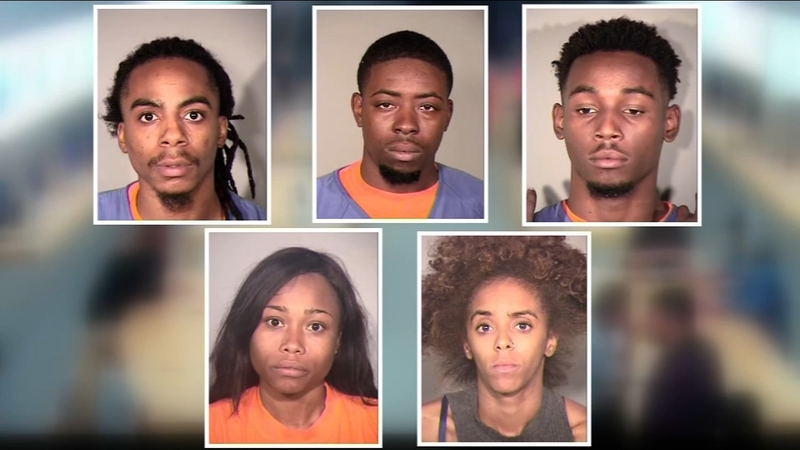 FRESNO, Calif. (KFSN) -- Following a string of Apple store robberies throughout the state, shoppers in Southern California finally said enough is enough and tackled two men caught in the act near the Apple store in Thousand Oaks over the weekend.

"These items are small and expensive so if they get away with a few things in their hands they're very easy to transfer into cash," said Ventura County Sheriff's Office Cpt. Garo Kuredjian.

Three men, all wearing hooded sweatshirts were caught on surveillance as they entered the store and proceeded to snatch iPhones and laptops - then seconds later they were gone.

A group of thieves accused of robbing several Apple stores across the state is now in custody.

An all too familiar scene for law enforcement, just last month in Fresno -- four men made off with more than $30,000 worth of merchandise from the Fashion Fair Apple store.

In Costa Mesa a couple weeks later the same thing.

Crystal clear surveillance video shows how a group of young men made off with a small fortune worth of Apple products.

And just two hours before the Thousand Oaks store was hit, more Apple products were stolen from another Apple store in Los Angeles.

Investigators are now trying to link the suspects to the same crew hitting Apple stores across the state.

"They're actually targeting these apple stores because of what they have and there's network in place to sell these on the secondary market," said Cpt. Kuredjian.

Minutes after the Thousand Oaks robbery officers tracked down the third suspect leaving the mall.

Three men were arrested, along with two women believed to be in the getaway car.