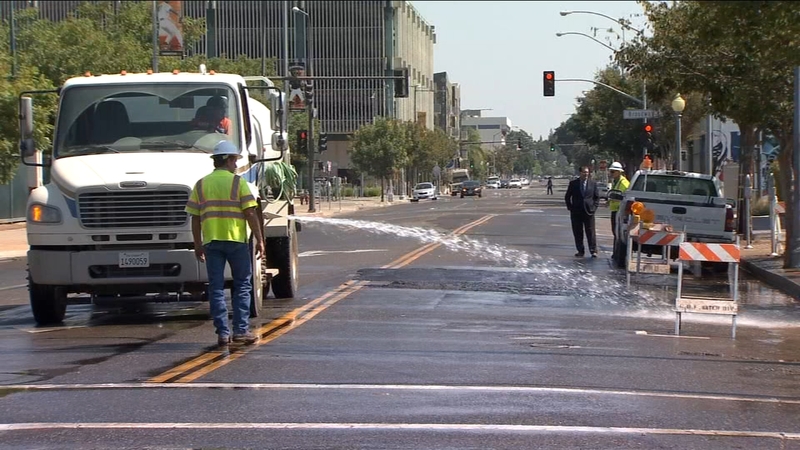 FRESNO, Calif. (KFSN) -- The pipe has been fixed. The road has been patched up and Tuesday's Grizzlies game will go on as scheduled.

But the whole thing had crews scrambling, to get the water main repaired and minimize the damage to the surrounding area.

Crews spent the day cleaning up after a water main rupture caused $5,000 worth of damage and sent thousands of gallons of water onto streets near Chukchansi Park late Monday afternoon.

"Most cities that have the systems we do. It's common it's no different than in your home. Plumbing is going to break things are going to fail it's just the system," said Department of Public Utilities Bud Tickel.

It took city maintenance workers less than an hour to stop the water from gushing.

The 54-year-old cast iron pipe that broke has been replaced with a malleable tubing.

"This is common. Usually not to the magnitude of this but this one split long ways," said Tickel.

Fans were left disappointed Monday night after the break forced the Fresno Grizzlies to cancel their game against the Salt Lake Bees.

The incident left the Downtown Stadium without running water or proper plumbing.

But fans with tickets to Monday's game can exchange them for any remaining regular season or playoff game for free.

"It's out of their control. You just have to go with the flow, literally," said Craig.

Friday's canceled game was the Grizzlies first in over three years and that was due to rain out.