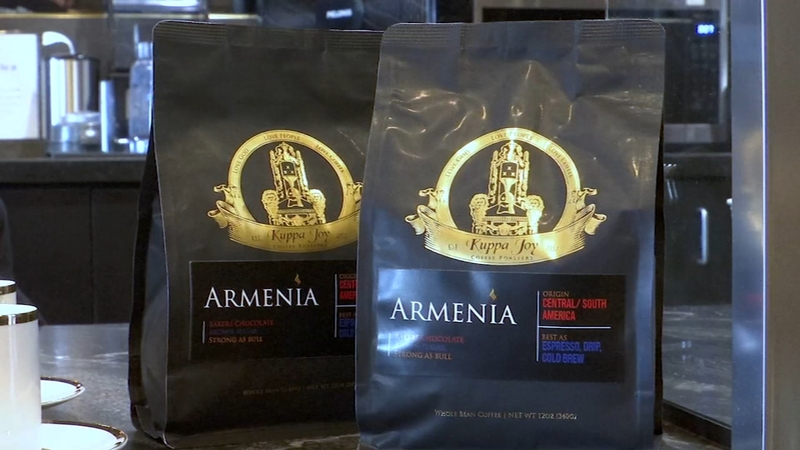 FRESNO, Calif. (KFSN) -- At Kuppa Joy Coffeehouse in northeast Fresno, Armenian coffee is brewing, and it's a part of a fundraiser to help those in Armenia.

Right now, deadly conflict is happening between Armenia and Azerbaijan. Hundreds, including civilians, have been killed and wounded in attacks.

RELATED: The conflict between Armenia and Azerbaijan explained and what's happening in Nagorno-Karabakh

"In talking with my friends and family in Armenia, they've said it's a David versus Goliath type of matchup," said Zack Follett, owner of Kuppa Joy Coffeehouse.

Follett said the conflict is deeply personal to him, which is why he wanted to get involved through prayer and his business.

"We created this blend, bakers chocolate, brown sugar, strong as a bull because that's what my grandmother would always say. As an Armenian race we're strong as a bull from all the things we've been persecuted and persevered from," Follett said.

The Armenian coffee will go on sale Saturday at all locations and online.

"It is the Armenian flag. The flag means more than just the flag to us. It's a symbol of peace, unity and strength," said Pateel Mekhitarian.

Knar Antaramian and Pateel Mekhitarian are behind the line Armeni.

RELATED: 'Stand with Armenia': Protestors in Fresno call for action from world leaders amid conflict

"During our studies at Fresno State, we were fortunate enough to travel to Artsakh and Armenia, which left a lasting impression in our hearts. So we think of Armenia every morning when we wake up and every night when we go to bed, so this really holds a true place in our hearts," said Mekhitarian.

They've gotten orders from across the Central Valley and as far away as Wisconsin and Canada.