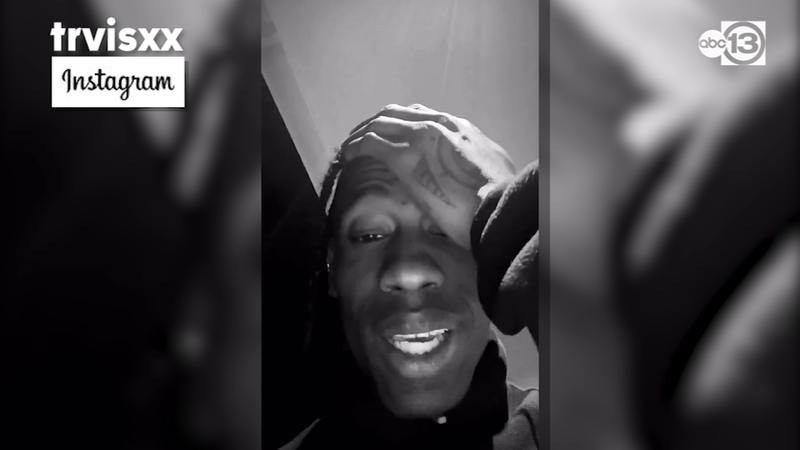 HOUSTON, Texas -- The rapper responsible for the annual music festival where eight people died and hundreds were injured took to social media Saturday to express his thoughts about the deadly incident.

Travis Scott released a series of short videos on the Instagram social media platform a day after the tragedy at the Astroworld Festival.

"My fans really mean the world to me," Scott said. "And I always just really want to leave them with a positive experience, and any time I can make out, you know, anything that's going on, you know I stop the show, you know, and help them get the help they need."

The 30-year-old appeared somber as he explained that he was working with authorities as they investigated the circumstances that led to the event and said he's attempting to reach victims' families in an effort to help.

Some fans have claimed that Scott didn't do enough to prevent the surge of the massive crowd estimated by fire officials to be around 50,000. Videos from the concert showed the artist pausing and asking for staff to help people in distress before resuming the show.

"I could just never imagine the severity of the situation," Scott said.

The third-annual Astroworld Festival, was intended to be a multi-day event that had sold-out months before opening Friday. It was abruptly canceled after scores of fans collapsed.

Press play to watch the scene that HPD is now treating as a crime scene after eight people died and hundreds of others were injured at Travis Scott's event Friday night at NRG Park.

Scott's video was posted as the identities of some of those who died were being released by friends and family members, including a Memorial High School freshman.

By Saturday afternoon, 13 of 25 victims who were transported to hospitals remained under doctors' care, Houston city leaders said. Five of those patients were under 18-years-old.

It wasn't yet clear what caused the deaths or injuries.

Representatives with the festival also released a statement about the tragedy.

Our hearts are with the Astroworld Festival family tonight - especially those we lost and their loved ones. We are focused on supporting local officials however we can. With that in mind the festival will no longer be held on Saturday. As authorities mentioned in their press conference earlier, they are looking into the series of cardiac arrests that took place. If you have any relevant information on this, please reach out to Houston Police. Thank you to our partners at the Houston Police Department, Fire Department, and NRG Park for their response and support.

Scott launched the Astroworld Festival in 2018. Like most other large events, it was canceled in 2020 due to the COVID-19 pandemic.