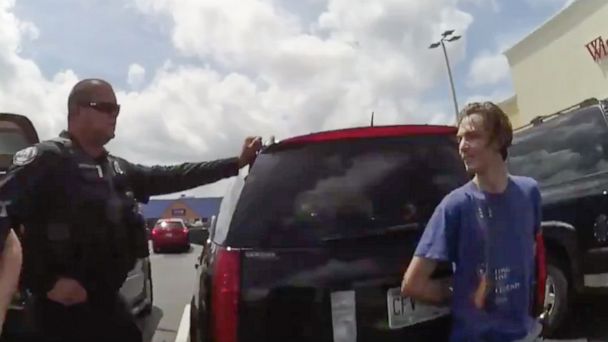 ABCNews
By ALEXANDER MALLIN
In the wake of the massacres in El Paso, Texas, and Dayton, Ohio, authorities across the country have arrested a number of suspects who have allegedly threatened similar mass shootings.

In the 21 days since the back-to-back mass shootings, 14 people, by ABC News' count, have said they were plotting or expressed interest in carrying out mass attacks, according to local police and federal law enforcement.

The threats came in the weeks after the FBI underscored its concern that "U.S.-based domestic violent extremists could become inspired by these and previous high-profile attacks to engage in similar acts of violence."

"The FBI asks the American public to report to law enforcement any suspicious activity that is observed either in person or online," the statement said.

Tips to the agency's National Threat Operations Center increased since the beginning of the month, according to a statement the FBI sent to ABC News on Saturday.

"Such increases are often observed after major incidents," the statement read.

In its count, ABC News did not include threats allegedly made by minors or other individuals who police determined did not have the capabilities or weapons to carry out the attacks.

John Cohen, a former Homeland Security official and current criminal justice professor who also works as an ABC News consultant, said the number of arrests in fewer than three weeks' time is "shocking and illustrates how significant threats of mass shootings have become."

"Any one of the people arrested over the last several days could have conducted attack," Cohen said. "These arrests likely saved lives."

On the same day as the Dayton shooting, Hillsborough County Deputies arrested Wayne Lee Padgett, 31, who allegedly threatened to shoot up a Walmart and told police he was "intrigued" by the El Paso and Dayton shootings.

He was charged with a felony count of threatening to use a firearm in a violent manner.

A listed public defender for Padgett did not immediately respond to a request for comment. As of Friday, court records suggested that he had not yet been arraigned and, therefore, has not yet entered a plea in his case.

Law enforcement discovered 25 guns and roughly 10,000 rounds of ammunition in his home, according to a criminal complaint. Prosecutors said an investigation into Olsen had been started as early as February, but they took action in light of the Dayton and El Paso mass shootings.

The FBI announced the arrest of Conor Climo, 23, for alleged possession of bomb-making materials after investigators found encrypted conversations he had been having about a potential attack on a Las Vegas synagogue or an LGBTQ bar.

Climo is alleged to have communicated with members of a white supremacist extremist organization that urges members to carry out attacks on the government, minorities and the LGBTQ community.

The Associated Press reported that Climo was set to have a court appearance on Friday.

Dmitriy Andreychenko, 20, was arrested for allegedly making a terrorist threat when he walked into a Walmart while armed with a rifle and wearing body armor.

Andreychenko was stopped at the scene by an armed off-duty firefighter until officers arrived and took him into custody, the Springfield Police Department said.

Andreychenko's attorney told ABC News that his preliminary hearing is scheduled for Sept. 16 and he has not yet had to enter a plea.

Florida police arrested Richard Clayton, 26, after he allegedly posted on Facebook what authorities believed amounted to a threat against a local Walmart.

"3 more days of probation left then I get my AR-15 back," Clayton allegedly posted. "Don't go to Walmart next week."

A listed public defender for Clayton did not immediately respond to a request for comment. Court records did not indicate if Clayton had yet entered a plea.

Palm Beach County deputies arrested Miranda Perez, 22, with charges of sending written threats after she allegedly sent a friend a Facebook message that she was "thinking of doing a school shooting."

Police said that Perez made the threat after learning her children would be transferred to the school.

Court records indicate that she has an appearance scheduled for Sept. 10 and does not appear to have yet entered a plea. ABC News' request for comment from her attorney were not immediately returned.

Police in Norwalk, Connecticut, arrested Brandon Wagshol, 22, on counts of illegal possession of large-capacity magazines, after he allegedly posted on Facebook an interest in committing a mass shooting.

The FBI and Norwalk police coordinated on the investigation after receiving a tip that Wagshol wanted to purchase large-capacity rifle magazines from out of state, police said.

Court records indicate that Wagshol's next court date is set for Sept. 6 and he has not yet entered a plea.

Deputies were alerted to several texts Wix allegedly sent outlining his desire to "break a world record for longest confirmed kill ever," police said in a statement.

Wix has pleaded not guilty to the charges.

The FBI and Indiana State Police arrested Thomas Matthew McVicker, 38, for allegedly making "credible threats" to carry out a mass shooting at a church in Memphis.

McVicker was arrested in Indianapolis after a friend tipped off the FBI that he had been considering killing people at a church this week, and that he wanted to "take his knife and slit the pastor's throat," officials said.

A listed public defender for McVicker did not immediately respond to a request for comment. As of Friday, McVicker had not yet entered a plea in his case.

Police in New Middleton, Ohio, arrested James Reardon Jr., 20, on charges of telecommunications harassment and aggravated menacing after he allegedly posted a video on Instagram that authorities believed amounted to a threat to commit a mass shooting at the Youngstown Jewish Family Center.

Reardon is allegedly a white nationalist who attended the violent Charlottesville protests in August 2017. In a raid of his home, police said they seized a cache of several semi-automatic weapons, rounds of ammo, a gas mask and bulletproof armor.

Reardon has pleaded not guilty to the charges.

The Department of Justice announced charges against Farhan Sheikh, 19, a Chicago man who in a social media post allegedly threatened an attack against a women's reproductive clinic.

According to a criminal complaint filed in the U.S. District Court of Chicago, Sheikh was arrested on Aug. 16 after posting on the social media platform iFunny that he would attack a local clinic and "proceed to slaughter and murder any doctor, patient, or visitor I see in the area and I will not back down."

"Consider this a warning for anyone visiting," Sheikh allegedly wrote, later adding that his account was not satirical.

A listed public defender for Sheikh did not immediately respond to a request for comment. As of Friday, Sheikh had not yet entered a plea in his case.

A 35-year-old man, Eric Lin, repeatedly expressed an affinity for President Donald Trump, who he said he believed wanted to start a "Racial War" that would result in the extermination of all non-whites, according to the Department of Justice.

"I Thank God everyday President Donald John Trump is President and that he will launch a Racial War and Crusade," Lin allegedly wrote in one message, adding that he believed the president would put every "dangerous non-White or Ethnically or Culturally Foreign group 'In Line'" ... that they will either be sent to "Concentration Camps" or dealt with "Ruthlessly and Vigorously by the United States Military."

A listed public defender for Lin did not immediately respond to a request for comment. As of Friday, Lin had not yet entered a plea in his case.

Jacob Cooper, 20, of Tennessee was arrested and charged with making a threat to shoot up a Washington, D.C., Planned Parenthood facility.

Cooper allegedly posted on the social media forum iFunny that he was "dead serious" about the threat, saying he would "do it with ricin, a bomb, or .308."

"Whatever it takes, then [sic] end result will be the same," Cooper allegedly wrote. "I am serious about this. If I am personally contacted by any federal agents, I will do this. I will kill you. Again, I am serious. Sic semper tyrannis."

Cooper has not yet entered a plea in the case amid preliminary court proceedings to determine whether he will be relocated to face the charges in D.C. District Court.

Isaiah Gant, a public defender for Cooper, told ABC News on Friday that Cooper's arrest "appears to be part of a national campaign by the Department of Justice to belie the concerns and fears of citizens by arresting anyone who exercises their right to free speech."

Police in Long Beach, California, arrested Rodolfo Montoya, 37, a hotel cook at the Airport Marriott in Long Beach, who allegedly threatened to "shoot up" fellow employees and guests at the hotel.

Police discovered a cache of firearms, including an assault rifle, ammunition, tactical gear and high-capacity magazines in a search of Montoya's home.