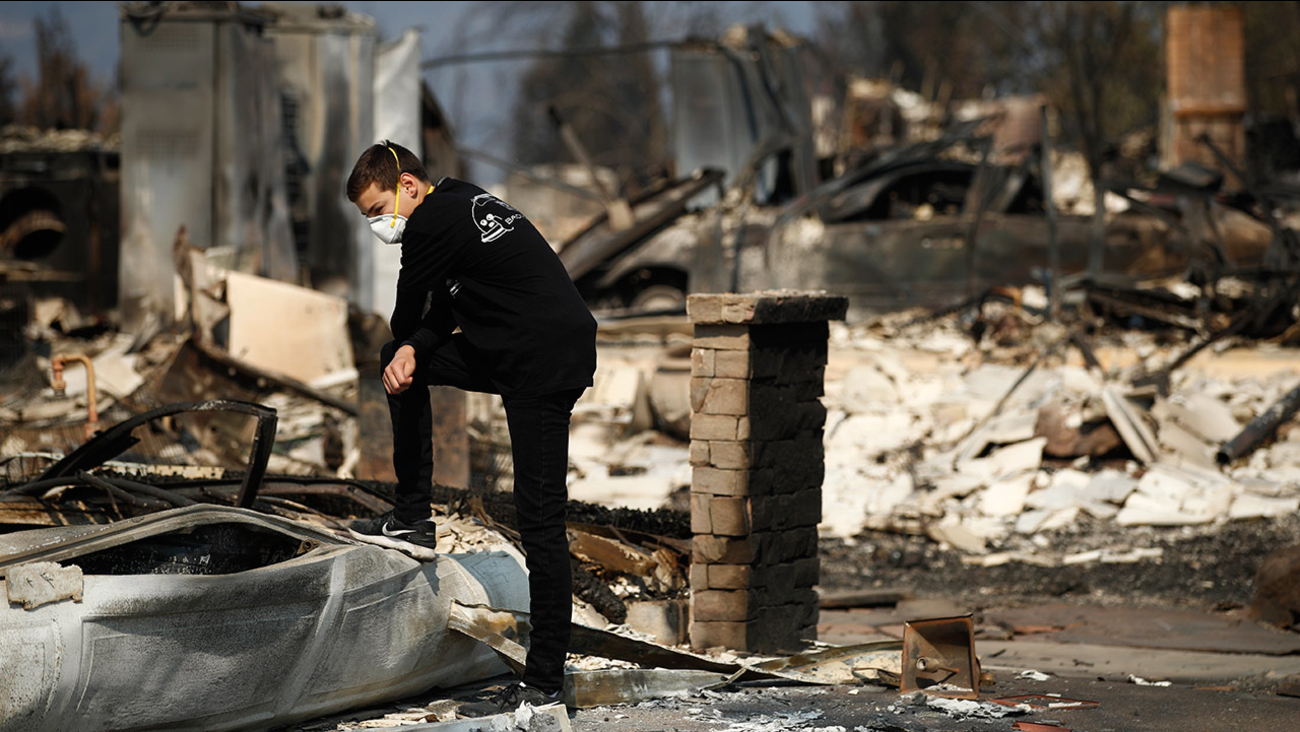 Benjamin Lasker, 16, pauses while looking at what remains of his home after a wildfire swept through Sunday, Oct. 15, 2017, in Santa Rosa, Calif. (AP)

NAPA, Calif. -- The Atlas Fire, the largest of the wildfires burning in the North Bay, is now 68 percent contained and has burned 51,064 acres.

With the winds dying down, fire crews gained ground as they battled the wildfires that have devastated California wine country and other parts of the state over the past week, and thousands of people got the all-clear to return home.

MAPS: A look at each North Bay fire

While the danger from the deadliest, most destructive cluster of blazes in California history was far from over, the smoky skies started to clear in some places. People were being allowed to go back home in areas no longer in harm's way, and the number of those under evacuation orders was down to 75,000 from nearly 100,000 the day before.

Many began to take the first steps toward rebuilding their lives.

"This is my home I'm going to come back without question," said Howard Lasker, 56, who returned Sunday with his daughter to view their torched house in Santa Rosa. "I have to rebuild. I want to rebuild."

The blazes were blamed for at least 40 deaths and destroyed some 5,700 homes and other structures. The death toll could climb as searchers dig through the ruins for people listed as missing. Hundreds were unaccounted for, though authorities said many of them are probably safe but haven't let anyone know.

In hard-hit Sonoma County, Sheriff Rob Giordano said authorities have located 1,560 of the more than 1,700 once listed as missing. Many of those names were put on the list after people called from out of state to say they couldn't reach a friend or relative.

Authorities said they will not let people return home until it is safe and utilities are restored. Pacific Gas and Electric Company said it expects to restore power and gas to the area by late Monday.

Many evacuees grew increasingly impatient to go home - or at least find out whether their homes were spared. Others were reluctant to go back or to look for another place to live.

Juan Hernandez, who escaped with his family from his apartment Oct. 9 before it burned down, still had his car packed and ready to go in case the fires flared up again and threatened his sister's house, where they have been staying in Santa Rosa.

"Every day we keep hearing sirens at night, alarms," Hernandez said. "We're scared. When you see the fire close to your house, you're scared."

At the Sonoma fairgrounds, evacuees watched the San Francisco 49ers play the Redskins on television, received treatment from a chiropractor and got free haircuts.

Michael Estrada, who owns a barber shop in neighboring Marin County but grew up in one of the Santa Rosa neighborhoods hit hard by the blazes, brought his combs, clippers and scissors and displayed his barbering license in case anyone doubted his credentials.

Lois Krier, 86, said it was hard to sleep on a cot in the shelter with people snoring and dogs barking through the night.

She and her husband, William Krier, 89, were anxious to get home, but after being evacuated for a second time in a week Saturday, they didn't want to risk having to leave again.

Nearly 11,000 firefighters were still battling 15 fires burning across a 100-mile swath of the state.

In the wooded mountains east of Santa Rosa, where a mandatory evacuation remained in place, a large plume of white smoke rose high in the sky as firefighters tried to prevent the fire from burning into a retirement community and advancing onto the floor of Sonoma Valley, known for its wineries.

Houses that had benefited from repeated helicopter water drops were still standing as smoke blew across surrounding ridges. A deer crossed the highway from a burned-out area and wandered into a vineyard not reached by the flames.

Those who were allowed back into gutted neighborhoods returned to assess the damage and, perhaps, see if anything was salvageable.

Jack Daniels had recently completed a year-long remodel of his Napa house near the Silverado Country Club and watched it go up in flames last week as he, his wife, 7-year-old grandson and two pugs backed out of the driveway.

His neighbors, Charles Rippey, 100, and his wife, Sara, 98, were the oldest victims identified so far in the wildfires.

Daniels, 74, a wine importer and exporter, said he lost everything left behind, including his wife's jewelry and 3,000 bottles of wine in his cellar.

"It's heartbreaking," the 74-year-old said. "This was going to be our last house. I guess we've got one more move. But we're fortunate. We got away. Most things can be replaced. The bank didn't burn down."