EXCLUSIVE: Atwater officer opens up about being dragged 90 feet by suspect's car 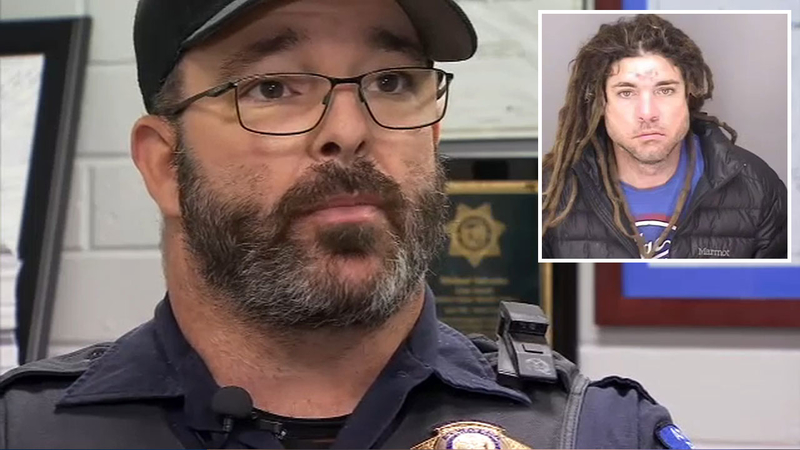 EXCLUSIVE: Atwater officer opens up about being dragged 90 yards by suspect's car

ATWATER, Calif. (KFSN) -- A man is in jail one day after an Atwater officer was injured after being dragged down a street for 90 feet by the suspect's car.

40-year-old Brandon Lussier is facing charges of assault with a deadly weapon on a peace officer and drug possession.

RELATED: Atwater Police searching for man after officer dragged 90 feet by his car

The officer, Robert Vargas, opened up about the frightening moments while stuck halfway inside the man's car.

Vargas has been with the Atwater Police Department for 17 years.

He says he thought he might die as he was being dragged, and his family was the first thing on his mind.

"While being dragged, first thing it was my family and this could be the opportunity that I may not get to see them again," he says.

But he returned to work within hours of the incident. You can still see the scuff marks on his shoes.

It all started Sunday afternoon when Vargas responded to a call of a man passed out in a car at this park.

The veteran officer was with his trainee during her first day on patrol.

She approached the driver as he went around to the passenger side.

"I can't see his face, all I can see is his lower body, but I can see down into the car from my vantage point, looking into the car I saw numerous pill bottles spread about the floor, what I believed to be syringes," Vargas recalls.

The officers spoke with the suspect, later identified as Lussier, through what they describe as tinted windows before he started to turn on the car. Vargas says he was worried about the safety of children at the park so he opened the passenger door and tried to grab the keys.

"He put the car into drive and took off. As he was going down the road, the door had slammed against me, pinning me inside the car with my legs and lower body outside the car being dragged along the ground."

Vargas finally managed to free himself and roll away, suffering cuts, scratches and bruises.

He joined the search for the suspect before he was ordered to go to the hospital.

Hours later, the department posted a surveillance photo of the wanted Toyota Camry on Facebook, and a tip quickly came in from a woman who spotted the car outside Rancho San Miguel in Merced.

After Lussier's arrest, the department also shared his mug shot on social media. It raised some questions because the suspect was initially described as a light-skinned African American with dreadlocks.

Chief Salvador says while he's not sure of the suspect's ethnicity, that description was based on a very quick encounter under stressful circumstances.

"Things happen so fast and even for trained police officers, those types of IDs, in that split second you can get them wrong or you can misinterpret what you see," he says.

During the arrest, police also searched the suspect's vehicle. They say they found what appeared to be heroin and cocaine, and they believe Lussier was under the influence.