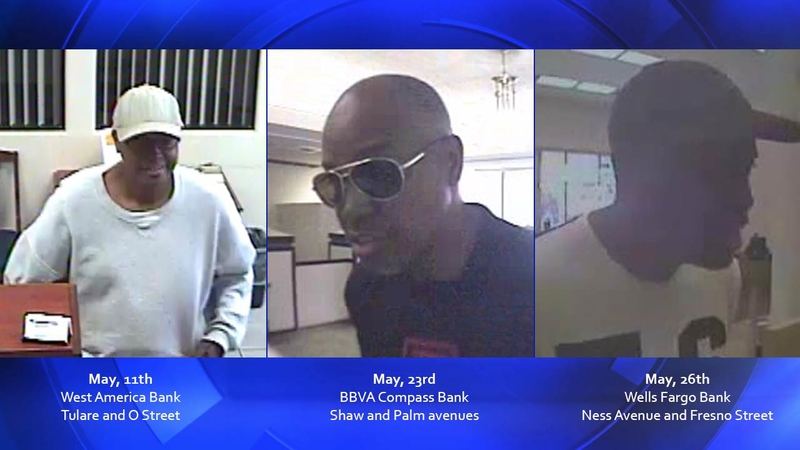 FRESNO, Calif. (KFSN) -- Fresno police are closing in on a man who could be responsible for as many as five bank robbery attempts.

Police say the suspect's day started at Bank of America, but he walked out with nothing after a scary interaction with a teller. Less than 30 minutes later, he hit another bank about two miles away. That might've been his fourth successful bank robbery this month.

The trail leading police to the third floor of a Parkway motel started miles away. Police swooped in on a Bank of America before 11 a.m. Thursday after a man tried to rob the place, apparently with nothing more than paper and words.

"He had a demand note, first at Bank of America threw the demand note to the teller," said Fresno police Lt. Joe Gomez. "She got scared, threw her hands up. He got frightened. He ran out, jumped in a suspect vehicle, a dark blue (Kia) Sportage."

But even before crime scene investigators dusted the bank for fingerprints, another robbery report, this one at Bank of the West near the Fashion Fair Mall. Police say photos from the scene show it was the same suspect, and this time he got away with a few hundred dollars. They haven't shared those photos with us yet, but they did give us others. The guy in the grayish tan sweatshirt robbed a Westamerica bank in downtown Fresno two weeks ago. The guy with the bald head and aviator sunglasses robbed a BBVA Compass bank near Fig Garden Village last Saturday. And the guy wearing number 76 robbed a Wells Fargo bank in downtown Fresno on Tuesday. Police believe it may be the same man doing all the robberies.

"I think one of those that was mentioned I worked about two weeks ago sounds very similar," said Lt. Gomez. "In Downtown Fresno, same time of day, early morning hours, same description of the suspect so strong possibility they could be connected."

After Thursday's two incidents, police fanned out across the city, monitoring banks and searching for that Sportage. They found it at the Valley Inn and kept eyes on it for quite a while before moving in. By then, though, the suspect was gone, and the SUV was filled with sleeping bags and empty junk food containers, but no cash.

Police did detain one person at the motel who may be connected to the robberies in some way, but they believe the main suspect walked away from the place before they arrived.

Do you know who this is? Fresno Police investigate a string of bank robberies --> http://t.co/fzElnVjzsF pic.twitter.com/m9ikCmXak7