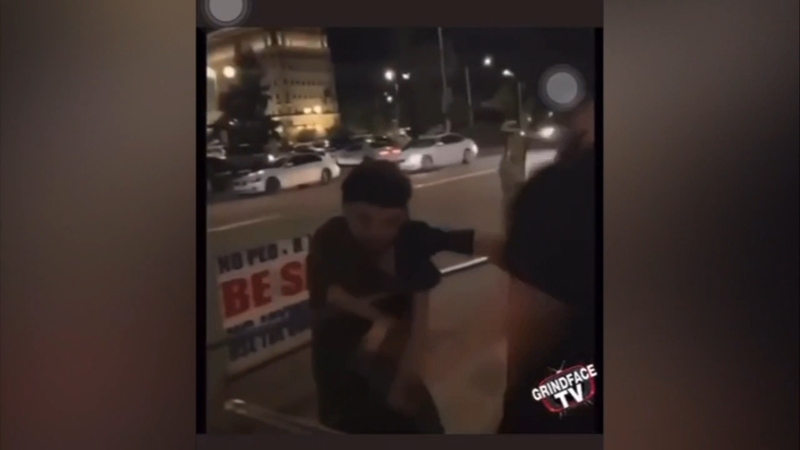 FRESNO, Calif. (KFSN) -- Disturbing video shows a security guard at a downtown Fresno bar punching a disabled man, but the man taking the brunt of it is the one who went to jail that night.

Alexus Ponce turned 21 in March, but to his mom, he's still a kid.

Video from outside the Mezcal Lounge on May 16 shows Ponce absorbing several punches from a security guard.

His mother saw it the next day.

"At that point, I felt like I couldn't protect him because it was already over, but that's what I wanted to do," Surarez said. "That's why I'm here. Because I want to protect him. I want him to know that he's not alone. That we're here for him. That it doesn't matter. That there's nothing he could've done that deserve that treatment."

Employees at Mezcal tell Action News Ponce was sexually harassing customers, so they kicked him out, but he kept trying to shove his way back in.

They say the security guard retaliated after Ponce pushed him and spit on him.

They called the police and officers arrested the 21-year-old for misdemeanor battery.

Ponce is 5'3" and weighs 115 pounds, and he has arthrogryposis, a disability severely limiting the use of his arms.

Police tell us they never saw the video until Action News sent it to them.

They've reopened the case and will question people at the bar about what they've now seen in the video.

"Without someone taking video, we wouldn't know the truth," said attorney Jeremy Dobbins, who is representing Ponce and his parents. "We would've heard it but we wouldn't have any proof."

Ponce's parents are hoping that leads to justice.

They're planning to sue the lounge, and they believe the security guard should be the one who's arrested.

"So definitely behind bars, I think, would bring some peace to me as a dad," said Cesar Lara. "Not having to worry about men like him who are cowards that are willing to hit defenseless people."