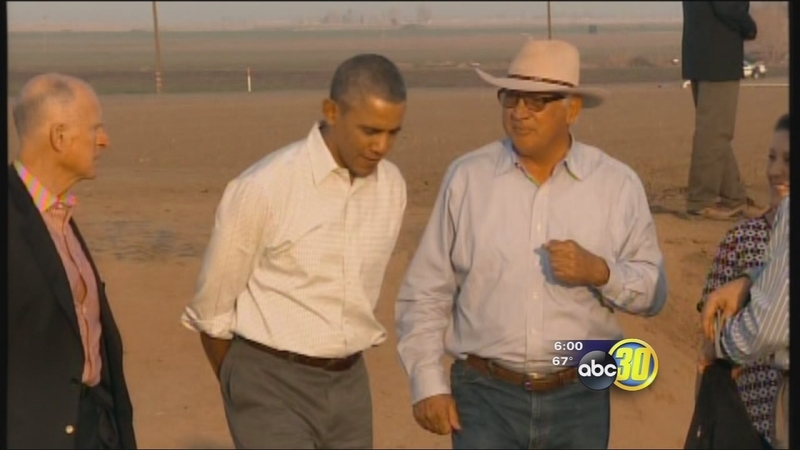 But a local farmer who met with the President two years ago says the issues Obama is looking to hit is not going to help growers get access to the water they need. Los Banos almond and melon farmer Joe Del Bosque met with President Obama in the Central Valley about the challenges he and other farmers are facing during the drought.

"I did have a sense of hope and he could have helped us," Del Bosque said. "My focus was just telling him what we do we grow food for the country and we can't do it without water."

Del Bosque says he told the president the easy fix to the decades-long problem was releasing water from the Delta.

"I felt like I planted the seed in his mind that possibly he and his cabinet members can talk and say this is what we can do," Del Bosque said.

He says that message likely did not resonate with the President at all after Obama released an 8-page proclamation, building what he calls a long-term drought resilience program. In it, he outlined a Climate Action Plan, discussing how state and federal agencies should work together to help people conserve water. But the plan did not mention the Delta and the water that Del Bosque said should be released.

Congressman Jim Costa agrees. "Even though it may be flooding north of the Delta, we may not get a drop of water here for our farms and there is something that should be done about that."

"Do you think the President has missed that?" an Action News reporter asked Costa.

"Yes," Costa said. "As you know we've had more rain and snow in the mountains and those were opportunities that have been lost to move water."

Costa say he is trying to work with Senator Diane Feinstein in repairing what is a broken water system in California today.

It's something Del Bosque and other farmers desperately want to see happen.