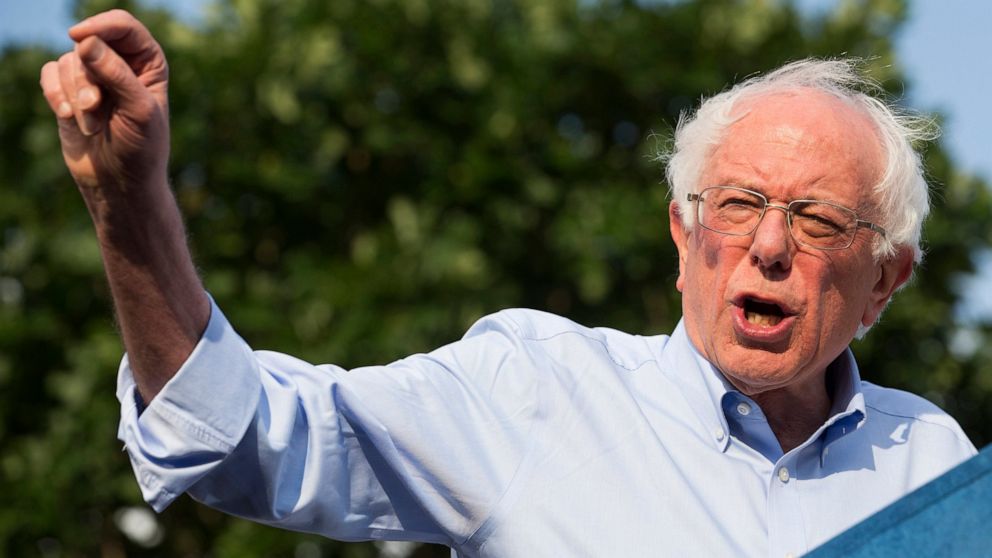 Sen. Bernie Sanders pushed back against the notion that he has not shared enough about his personal life and family during his two presidential runs Thursday morning, arguing that ultimately, his ideas to "transform the country" should take precedence.

"Of course people have a right to know about who you are as a person, and your family and your life -- I think sometimes the media goes overboard on that and does not pay enough attention to what you are trying to do to transform the country," Sanders, I-Vt., said during an interview on "Good Morning America," adding, "The issues I talk about are health care for all people. You know, you may like me or you may not like me, but the truth of the matter is every American is entitled to health care as a human right."

The comments come in the midst of the senator's second presidential campaign, during which he has established himself as a frontrunner for the Democratic presidential nomination. Four years ago, riding an anti-establishment campaign with an agenda focused upon tackling economic inequality in the U.S., Sanders vaulted to fame and ultimately won 23 contests nationwide, despite falling short to Hillary Clinton.

On Thursday, Sanders said that he is "feeling really good" about his current presidential campaign, citing the strength of his grassroots fundraising efforts and volunteer network.

"We have received now 2 million individual campaign contributions averaging $19 apiece. I think that's an all-time world record in terms of the number of individual contributions," the senator said on "GMA." "We have over a million volunteers. We're very strong in grassroots activism in the early states. So we're feeling very good."

Though candidates such as Sens. Kamala Harris, D-Calif., and Elizabeth Warren, D-Mass., have made gains in recent weeks, Sanders was still the only candidate other than former Vice President Joe Biden -- who has led every national poll since entering the race in April -- to earn at least 20 percent support in an ABC News/Washington Post poll last week gauging support of the Democratic presidential hopefuls. Sanders' 23% finished second to Biden's 28%; Harris and Warren followed with 11% each.

On Wednesday, Sanders authored an op-ed in the Washington Post in which he was critical of comments Biden made during an April 2018 speech, in which the former vice president he didn't think "500 billionaires are the reason why we're in trouble" with regard to the nation's income inequality.

"I respectfully disagree," the senator wrote in the op-ed, which specifically targeted disparities in wealth by race, adding, "The racial wealth gap lingers in part because the politicians who could close it are funded by the very corporate donors who continue to benefit from it.

Asked about the piece Thursday morning, Sanders highlighted, as he does frequently on the campaign trail, the fact that the richest three people in the country -- billionaires Jeff Bezos, Bill Gates and Warren Buffett - hold more wealth than the bottom-half of Americans, and cited statistics that showed the issue was even more dire for African-Americans.

"You have massive racial inequalities where the average white family has ten times more wealth than the average black family, massive disparities in education, red-lining in housing, financial services and so forth," he said. "So as a nation, we have got to address both issues. We have to deal with the overall issue of inequality in America. We have to deal with the racial inequality as well."

With health care reform efforts dominating much of President Donald Trump's first term in office and becoming the number one issue for voters during the 2018 midterm elections during which Democrats made sweeping gains on Capitol Hill, Sanders has made his signature Medicare-for-all plan a centerpiece of campaign.

In the "GMA" interview, the senator responded to criticisms that the plan -- which goes further than those of many of his Democratic primary rivals by calling for the elimination of private insurance -- was one rooted in corporate interests.

"The critique is coming from the insurance companies and the drug companies who will spend tens and tens of millions of dollars to maintain a dysfunctional health care system which makes huge profits for them while 80 million Americans today either have no health insurance or are underinsured with high deductibles and high co-payments," he said.

On the issue, earlier in the morning, Sanders' campaign announced that he would be making a trip to Canada later this month to highlight the increasing prices of prescription drugs in the U.S.

In what will be the first foreign trip of his 2020 presidential campaign, the senator will join a bus of type 1 Diabetes patients on a drive from Detroit to Canada, where the patients will purchase insulin at what is expected to be a lower price than what they would find in the U.S. The trip is inspired by a bus trip Sanders' took two decades ago when he accompanied breast cancer patients into Canada to buy prescription drugs at similarly reduced prices.