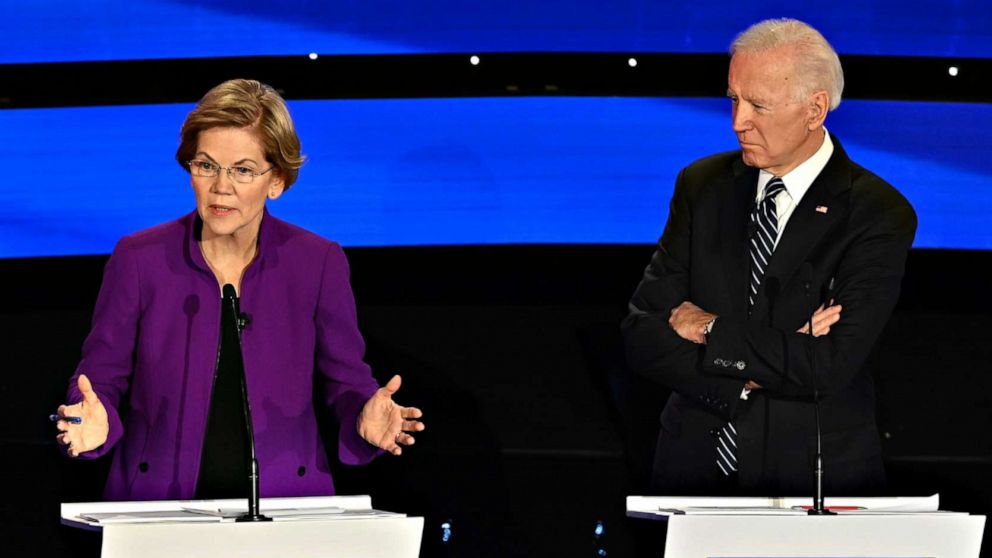 On a call with reporters Sunday afternoon, senior advisers to Biden announced the former vice president now supports making public colleges and universities tuition-free for students whose families earn less than $125,000 a year. That proposal comes from a bill Sen. Sanders originally introduced in 2017 called the College-for-All act, and is a notable addition to Biden's current higher education policy, which would make community colleges free for two years, regardless of income.

"Bernie has put forward a plan that would make public colleges and universities free for families whose income is below $125,000. It's a good idea, and after consideration, I am proud to add it to my platform," Biden tweeted Sunday.

Biden also announced his endorsement of Elizabeth Warren's bankruptcy plan, which would largely undo a 2005 law the two famously sparred over in the past.

During a virtual town hall with Illinois voters on Friday night, Biden revealed his endorsement while answering a question from a participant about actions he would take to appeal to supporters of his current rival Vermont Sen. Bernie Sanders, should he win the Democratic nomination.

"One of the things that I think Bernie and I agree on ... I've endorsed Elizabeth Warren's bankruptcy proposal, which in fact goes further, allows for student debt to be released in bankruptcy, [and] provides for a whole range of other issues that allows us to in fact impact on how people are dealing with their circumstances," Biden said. "So there's a whole range of things we agree on."

Biden's campaign confirmed to ABC News that the former vice president has reviewed Warren's bankruptcy plan closely, and supports the proposal. They said to expect to hear more from the candidate on this topic during Sunday night's Democratic debate.

An aide to Warren tells ABC News that Biden's team gave them a heads-up he would endorse the plan, and the two campaigns have been in touch on the issue. Biden's team said they were not in touch with the Sanders Campaign prior to announcing the policy shift.

Sanders issued a statement following the announcement of Biden's shift, saying while the he was encouraged by his movement, the plan did not go as far as his current plan for higher education costs, which would place no income-cap to qualify for tuition-free education at public colleges and universities.

"It's great that Joe Biden is now supporting a position that was in the Democratic platform four years ago. Now we have to go much further. We need to make all public universities, colleges and trade schools tuition-free for everyone like our high schools are. We need to cancel all student debt. And we can fund it with a small tax on Wall Street speculation," the statement reads.

Biden's adoption of Warren's plan also marks a massive change for the former Delaware Senator, as it would undo much of the Bankruptcy Abuse Prevention and Consumer Protection Act of 2005, that made it more difficult to file for bankruptcy -- a bill Biden voted for and quarreled with Warren over during his tenure in the Senate. Warren also seemed to reference their differences when announcing her plan back in January.

"By making it harder for people to discharge their debts and keep current on their house payments, the 2005 bill made the 2008 financial crisis significantly worse: experts found that the bill 'caused about 800,000 additional mortgage defaults and 250,000 additional foreclosures,'" Warren wrote in a Medium post announcing her plan. "And despite the claims from the industry and their allies in Congress that the 2005 bill would reduce credit card costs across the board for consumers, the cost of credit card debt went up too."She added, "I lost that fight in 2005, and working families paid the price."

Warren's proposal would make it easier to file for bankruptcy, as well as end provisions making it difficult for student loans to be discharged while filing for bankruptcy.

Biden's endorsement of these progressive policy proposals mark a significant for the former vice president as he seeks to lock up the Democratic nomination -- a fight that has shifted further in his favor against Sanders, who now faces an improbable path to the nomination.

Biden has received endorsements from 11 former 2020 candidates in recent weeks -- showing a coalescing of support around the former vice president.

Following her departure from the race, Warren did not offer an endorsement of Sanders or Biden. Instead, she said she needed time following the suspension of her campaign. But in an interview following her exit, Warren did acknowledge the former vice president, and their "bankruptcy wars."

"We go back a long way. We were in the bankruptcy wars against each other," Warren said of Biden in an interview with MSNBC. "My whole life has been about working families, and more, about how government should be there to be on their side."

"I believe that the vice president has the same goal," she added.

Advisors for Biden say that along with these policy adoptions, Biden will make it clear to supporters of Sanders that there is room for them in the Biden coalition when he faces off with the Vermont Senator Sunday Night.

"Joe Biden will make it clear to Senator Sanders' supporters that there's space for them...we welcome your support, but we're also going to welcome their ideas, their passion and their commitment to the issues that they care so deeply about," one Senior Advisor said.