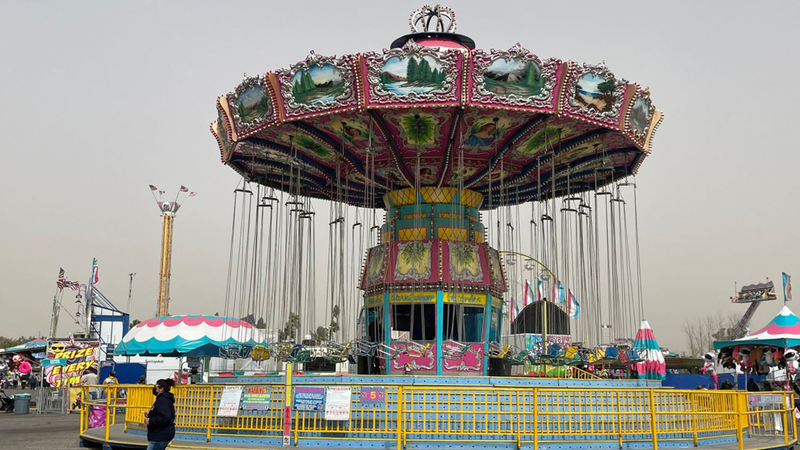 FRESNO, Calif. (KFSN) -- Dozens of fairgoers lined up to get tickets to enjoy rides at the Big Fresno Fair, but, signs were posted and each person was warned that not all rides were running.

"We don't want the swings to be moving side to side when you're on the ride so until those gusts stop, we will keep that ride closed," said Sean Butler, the COO of Butler Amusements.

The swings, Ferris Wheels, and sky-high turbo ride all shut down due to winds.

Multiple rides have been grounded at the @BigFresnoFair due to the wind. That includes the swings, Ferris wheel, The Turbo, & The Inversion. @ABC30 pic.twitter.com/2APKWsmNob

For some families, it didn't matter.

"We get on the smaller rides, we don't get on the ones that go really high and so it's just something fun for them to do," said Corinne Gamino, who was at the fair with her daughter and her niece.

Others were looking forward to getting on those rides, but were grateful the fair was making safety a priority.

"I wouldn't want nothing bad to happen to them, especially if they're like high in the sky. Of course, I'd be scared," said Michelle Loera, who was there with her daughter.

The wind kicked up dust and canopies.

Despite the weather, the horse races were set to happen all morning until they weren't.

An announcement over the speaker system at the grandstands offered an apology to spectators as the competition was officially canceled Monday afternoon.

Horse races have been canceled at the @BigFresnoFair due to air quality. As many races as possible will be added to Friday’s card to make up for today. @ABC30 pic.twitter.com/ruTidxfIKL

It was a let down for Joshua Hernandez and his family.

"It was a bummer, you know a lot of people made plans and even took days off from work just to be here because it's once a year, so short notice," said Hernandez.

Organizers said it's unsafe for jockeys and horses to compete when the Air Quality Index is more than 150. It was at 225 when officials made the call.

"It's unfortunate but we have to do what's right to protect our athletes, both the jockey and the horses," said Deputy Manager of the Big Fresno Fair, Lauri King.

Despite the setbacks, people still packed the fairgrounds to enjoy the free entertainment and the food.

Set up was also still underway at the Paul Paul Theater ahead of the Queen Tribute band set to perform Monday night.

Officials are keeping a close eye on the weather. If the wind dies down, the rides that have been shutdown can reopen.