Warning: The video above may be disturbing for some audiences
KABC
By ABC7.com staff 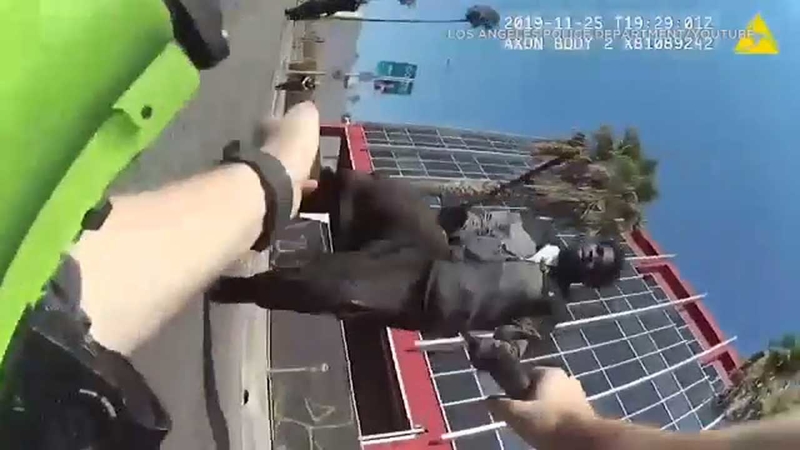 HOLLYWOOD, LOS ANGELES -- The Los Angeles Police Department on Thursday released dramatic body-camera videos that show the harrowing moments before officers shot and killed a machete-wielding man on a street in Hollywood on Nov. 26.

The series of events began about 11:30 a.m. when Nathaniel Pinnock allegedly robbed an auto-parts store near the intersection of Highland Avenue and Sunset Boulevard at knifepoint, the LAPD said.

According to investigators, one of the videos released Thursday shows the 22-year-old man carjacking a vehicle in the drive-thru of a nearby fast-food restaurant. He eventually crashes the car into two police cruisers as he flees from that scene.

Officers chase the suspect after he exits the vehicle with a machete in hand and starts running down the street.

Bodycam footage shows one officer shouting commands at the man, who then turns around and runs toward the officer with the weapon in his hand.

Several shots are fired by the officer as he backs away from the approaching suspect, prompting the officer to run into the street, where he loses his footing and falls to the pavement. Just as the suspect reaches the officer on the ground, two additional officers arrive and one shoots the suspect.

Officers Youssef Brady and Nicolas Padilla, both assigned to the LAPD's Hollywood Division, were identified by the department as the officers who opened fire in the incident.
Report a correction or typo
Related topics:
lapdattackpolice shootingofficer involved shootingmachete
Copyright © 2021 KABC-TV. All Rights Reserved.
More Videos
From CNN Newsource affiliates
TOP STORIES