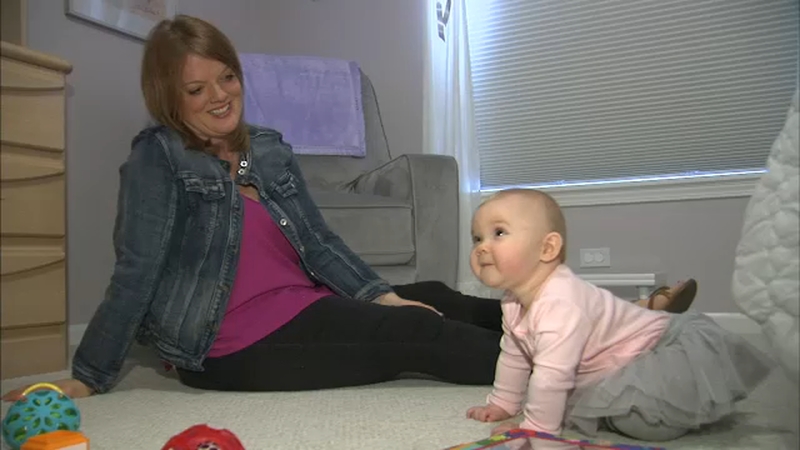 CHICAGO -- Jen Lowright learned early the importance of speaking up for herself when it came to her healthcare. She said it saved her life when she was diagnosed with breast cancer in her early 30s, and it also helped her achieve her dream of having a baby.

Lowright savors her moments with her 8-month-old daughter, Emmie, because there was a time when she was not sure she would be a mother.

In 2008, at the age of 34, Lowright and her husband, Chris, got married. Six weeks later, she was diagnosed with breast cancer.

"It was already at Stage 2. It was a very aggressive cancer," she said.

The cancer was detected during a mammogram which her doctor recommended she get at age 31 because of her dense breast tissue. Lowright made sure she continued to get one each year.

"Had I not done that, I firmly believe I wouldn't be here," she said.

Lowright said she and her doctor quickly established a game plan. First, a double mastectomy, followed by intravenous chemotherapy, then radiation, then more chemotherapy pills.

The protocol would make sure she was cancer free but could compromise her ability to produce her own eggs when she wanted to get pregnant.

So before starting her treatment, she and her husband made nine embryos that were frozen for when they were ready to start a family, a decision that her reproductive endocrinologist at the Fertility Centers of Illinois called forward thinking.

"They get through their cancer treatment and a lot of times, if they haven't thought about this ahead of time, they don't have eggs to use," said Dr. Allison K. Rodgers.

The embryos stayed frozen for several years before Lowright was declared cancer free.

"I never let it beat me down. There were moments, definitely, and I honor those where I just had a really hard time," Lowright said.

Finally, Lowright and her husband started in vitro fertilization with their embryos, but went through a few unsuccessful rounds. Nine years and nine embryos later, Lowright became pregnant with Emmie.

It was triumph for the family after her mother, Marilyn, was also diagnosed with breast cancer.

"It turned out, with our miracle baby. I'd say she was meant to be," said Marilyn Gibbs, mother.

Along with the joy came a terrible tragedy. Lowright's husband Chris died unexpectedly when she was pregnant. Emmie was born in January.

Every baby is a miracle, but she is definitely just awesome. I don't know, I'm just so grateful," Lowright said.

Lowright said her journey taught her the importance of advocating for her own healthcare during her cancer treatment and when it came to starting her family.

"If you're not feeling like you're being listened to or you're not getting the care that you should be getting, it's so important to be advocating for yourself and consider getting another opinion," said Dr. Rodgers.

Lowright's self-advocacy influenced her mother. She is over 70, when the frequency of mammograms drops to every two years. But because of her daughter, she insists on getting one every year.