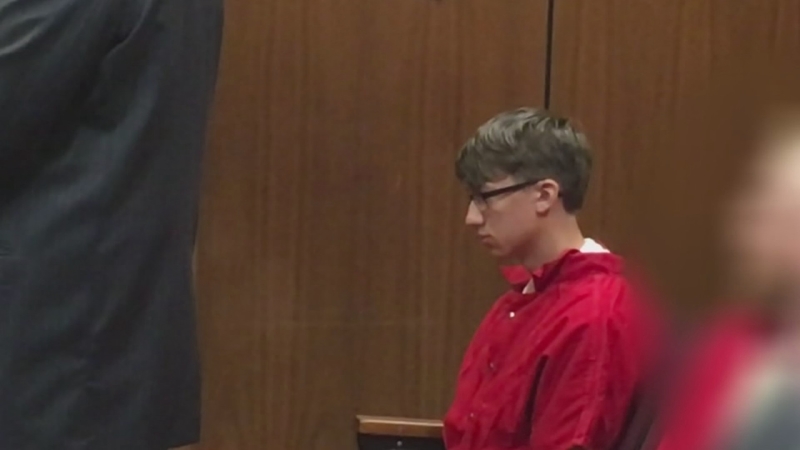 FRESNO, Calif. (KFSN) -- Kyle Dwelle held his sack lunch in his lap Thursday before he pleaded not guilty to two counts of threatening to commit a crime that would cause death or great bodily injury.

Judge Gallagher is keeping no bail for now. But has scheduled a hearing on the matter for tomorrow. Kyle Dwelle’s attorney would like bail opportunity. pic.twitter.com/JGUi4dEjOO

Attorney Roger Nuttall was hired by Dwelle's family. He's spent time getting to know his client the past few days and says the 18-year-old is not a dangerous man.

"He's not going to hurt anyone. I can assure everyone of that."

Nuttall acknowledged Dwelle is depressed and needs some sort of evaluation.

Criminal defense attorney, Roger Nuttall is representing Dwelle. He said his client suffers from depression and needs some type of an evaluation. pic.twitter.com/8SwqKYW8hO

"He's going to need to stay busy and probably have some evaluation by professionals to help him to understand why he did this and not to do it again."

But Fresno County Deputy District Attorney Andrew Janz said Dwelle's threats should be taken seriously, especially since he made at least some effort to prepare for a shooting.

"He made steps to purchase a firearm. He reached out to a firearms dealer and a friend he knew to possess illegal firearms."

DA Andrew Janz says Kyle Dwelle was a credible threat who also took steps to try to get a gun. But- the 18 year old’s attorney says Dwelle is no threat and it was just ‘loose talk.’ pic.twitter.com/V7jMWjc43F

Concern and fear from the community and district leaders prompted Clovis Unified officials to petition for a restraining order. The order bans Dwelle from campus and forces him to stay away from a teacher that he told detectives that, "If he was going to shoot someone, it would be her."

Two students were also listed in the court document and wrote statements about what Dwelle told them and what they heard second hand.

The judge imposed on a no-bail hold on Dwelle, ensuring that he will stay in the Fresno County, for now.

Across town, at the Buchanan High graduation, security was stepped up with all students being patted down to check for weapons.