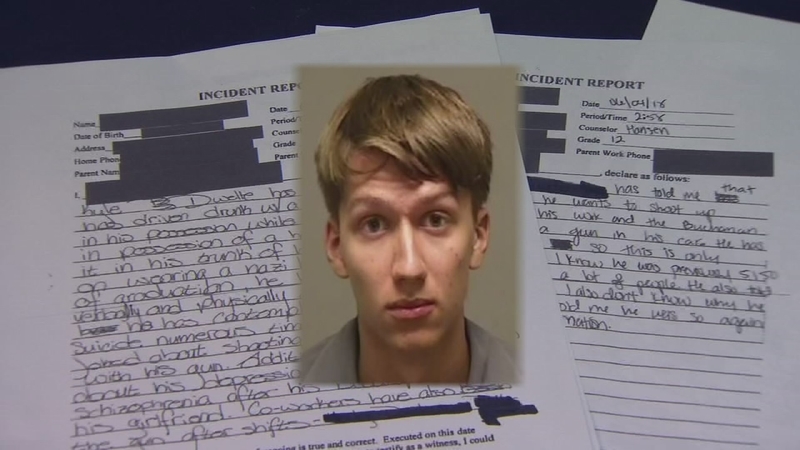 CLOVIS, Calif. (KFSN) -- Friends and co-workers of 18-year-old Kyle Dwelle paint a disturbed mind - one that was suicidal, depressed, with murderous intent.

"The police jumped on it really quickly, so we feel more comfortable about it," said Evette Venturi, a Buchanan High School student.

Officers say Dwelle's target was Graduation Day. At least two people heard the suspect boasting about his plans. Court documents say he showed off his gun and expressed his desire to shoot up the ceremony while wearing a Nazi band.

Very SCARY!
Students at Buchanan High School reported fellow student Kyle Dwelle had a gun and intended to wear a Nazi band as he shot up the BHS graduation on June 7.
The DA's office filed 2 counts of criminal threats against him and CUSD filed for a restraining order. @ABC30 pic.twitter.com/Fg0eWAvadv

"This was a verbal threat that some very brave students came forward and told us about. We took it very seriously, and through our investigation, we believe it was a credible threat," said Captain Tom Roberts with the Clovis Police Department.

The suspect was arrested Monday and remains in the Fresno County Jail without bail. He's scheduled to be arraigned Thursday. With Buchanan's graduation set for the same day, the district filed a restraining order in case Dwelle was to be released from custody.

Students say Dwelle kept to himself at school and rarely talked to others. Officers say he didn't appear to be making the threats as a joke.
According to this restraining order, he told officers if he was going to shoot someone, it would be a Buchanan high school teacher.

"During the investigation, there was a handgun that was located. This handgun was a BB gun, but it looked very real," said Captain Roberts.