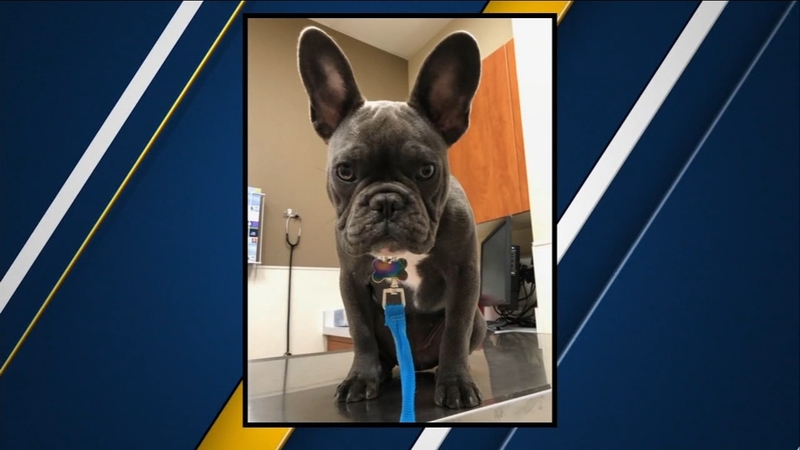 FRESNO, Calif. (KFSN) -- A young dog and more than $100,000 in valuables were taken when a burglar broke into a Dinuba home early Wednesday morning.

The homeowner did not want to speak on camera but tells Action News this is the second break-in at this home this week.

They didn't take anything the first time, but she thinks they got a good layout of the house before coming back early Thursday morning when they stole cash, jewelry, an Amazon Echo, and the family's 10-month-old French Bulldog, Busy.

The homeowner was at the gym when it happened.

Tulare County Sheriff's Spokeswoman Ashley Ritchie says, "We are looking at some tire marks and some shoe marks, but right now we're really asking people to keep a lookout."

Investigators say between 5 and 7 am burglar busted into the front door, damaging the framing around the door of the house located near Road 64 near Avenue 392. The thief then took a 10-month-old French Bulldog from the home, along with jewelry, cash, and electronics.

Some of the jewelry taken is very distinct. The homeowner tells Action News a unique opal pendant was one of the items stolen.

The homeowner describes Busy, as an energetic bundle of joy. She received the dog as a Christmas gift.

She says Busy has a chest deformity, and if someone tried to breed her, she could die.

French Bulldogs are expensive dogs and have become a frequent target for thieves in recent years.

Earlier this year, a Visalia woman was reunited with her French Bulldog after it was stolen from her car in a Costco parking lot.

They're also become very popular, especially in large cities such as Los Angeles and San Francisco.