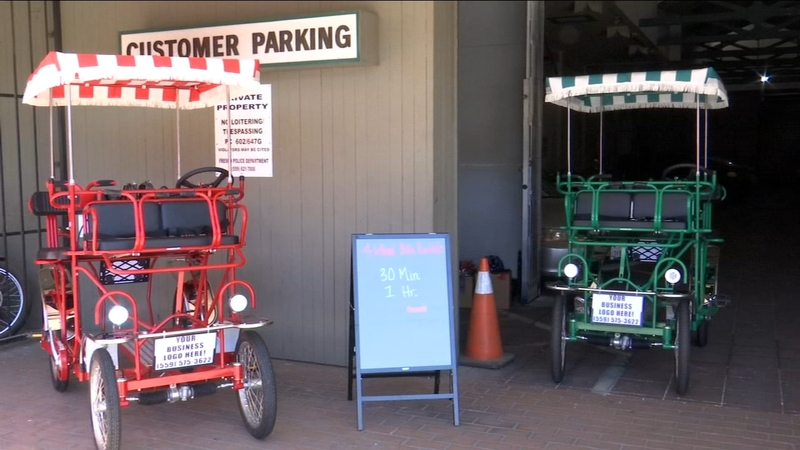 FRESNO, Calif. (KFSN) -- A new business made their debut in Downtown Fresno during ArtHop.

"Fresno didn't have something like this. So I wanted to be one of the pioneers to bring that here," Morris said.

The bikes have two seats for two peddlers and in the front, there is a spot for kids to ride.

Morris added he hopes this will bring change.

"I noticed how the downtown is developing. I brought these Surreys out to have fun," he said.

Morris is renting out the bikes during special events like ArtHop.

Chris Rocha with the Downtown Fresno Partnership was excited to see these bikes.

"It gave a whole new feel to see people going up and down the street. Everyone was smiling and having a great time and everybody that walked by were excited to see something like that during ArtHop," Rocha explained.

He is looking forward to how this will transform downtown, especially Fulton Street.

"It's more open to friends and families to be able to use something like pedal bikes to get around and make it more family friendly down here," he said.

Morris mentioned he is just in the early stages of opening his business and has some big plans.

He said there are only two bikes to rent but plans to bring in a third one that can seat up to four peddlers.

The City of Fresno is also looking to help revitalize downtown, specifically the Fulton District. They are developing an app that will feature all the restaurant, attraction and some history about Fulton Street.

So soon you will be able to hop on a bike with your friends and explore the area.

"This is the type of stuff that is going to be useful for people who aren't familiar with downtown or maybe they haven't ventured to Fulton. This is exciting," Rocha said.

Morris noted he is still working on an official business name.