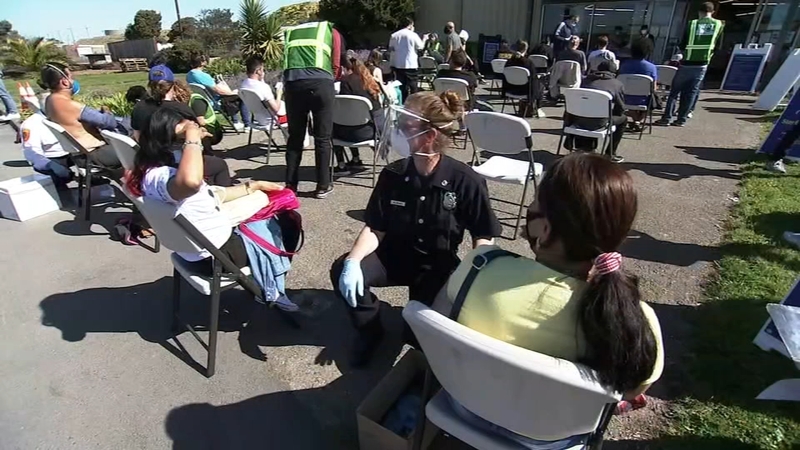 SAN FRANCISCO -- In California, seven million more people are eligible for the COVID-19 vaccine Thursday. Anyone over the age of 50 will be able to get vaccinated.

Despite eligibility expanding, many older and at-risk Californians are still waiting to get their vaccine, even after they became eligible weeks ago.

Flipping through pages of notes, San Francisco resident Anthony Rhody, looks through all his work documenting the hours of effort he's put into finding a COVID vaccine.

RELATED: Is your family member eligible for the COVID-19 vaccine? You can get a dose too in Fresno County

"The unpaid part-time job," he exclaimed.

Anthony just turned 60 and has been living with AIDS for 25 years. Because of his health conditions he's been eligible for weeks.

"I've found out the hard way that being eligible isn't the same as being vaccinated," said Anthony. "It's just stress. I don't need the stress."

And now with eligibility expanding, many California doctors are concerned that stories like Anthony's will become more common.

"I'm a little frustrated, yes. I think if we knew for certain we were getting a great deal more vaccine, it would make more sense to me," said Dr. Louise Aronson, who is a leading geriatrician at UCSF.

Dr. Aronson is on the state committee that drafted the vaccine priority groups. But, the workgroup was disbanded this month, Aronson says without being consulted about the new eligibility timeline.

RELATED: Is it OK to get a COVID-19 vaccine in another California county? Here's what we found
EMBED More News Videos

COVID-19 vaccine appointments are slim in the San Francisco Bay Area. Is it OK to drive to Fresno, Los Angeles, or other counties in the Central Valley and Southern California where there are more available? The answer is different depending on the site.

"It reminds me a little bit of when we had said it was 75 and up and then the governor said it was 65 and up," she explained. "That meant that people at the highest risk, some of them had to wait a little longer. So, there is as always with politics, a tension between pleasing people, which includes for economic reasons and just for, you know, maybe you're facing a recall."

Aronson said that because so many people needed a second vaccine in March, there was a relative shortage, but, "we were hoping April would be better, but now with the news from Johnson & Johnson, it's not clear. So we haven't marched through all the previous groups and now we're opening up to more groups. It's concerning."

The California Department of Public Health explained to our sister station in San Francisco why they disbanded the committee." In early March, President Biden asked that all adult Americans be made eligible for vaccines by May 1, largely signaling an end to the work of the guidelines drafting group, Community Vaccine Advisory Committee and others who have participated in the process. We thank them for their contributions."

The state expects a large influx of vaccines in the coming weeks, with 2.5 million doses weekly in early April and more than 3 million doses weekly in the second half of the month. In the last month, the state has increased the share of vaccines being administered to the hardest-hit communities by 30%, narrowing the gap between the wealthiest communities and low-income communities. 78% of the 65+ population have already received a COVID vaccine, per CDC data.

RELATED: Californians 50+ can now make a COVID-19 vaccine appointment on MyTurn: Here's how

As for the news that California is expecting more vaccine supply as it expands eligibility, Anthony said this, "I'm going to be paying attention."

While at the food bank Wednesday, Anthony was able to sign up for a vaccine at Moscone. I'll believe it when I see it. If nothing goes wrong, I'll be there Friday."

Maybe you decide you're going to get out of that line and or offer your spot to someone who's, you know, rolling up in their wheelchair or clearly has a lot of gray hair, or you know something where if it seems like they might be at higher risk than you, and realize that you will get one. Eventually, it's hard I recognize that it's hard when it seems like lots of people are getting it, it's hard when the government is sending mixed messages

As for expanding eligibility, Dr. Aronson says just because you may be eligible for the vaccine starting Thursday or mid-April, doesn't mean you should get it, "I recognize that it's hard when it seems like lots of people are getting it, it's hard when the government is sending mixed messages," Aronson says because many high-risk Californians still need the vaccine, she hopes people who are young, healthy, and still working from home can hang on a little longer and make sure people who need the vaccine most, have access.

"Maybe you decide you're going to get out of that line and offer your spot to someone who's in their wheelchair, or clearly has a lot of gray hair, or someone who seems like they might be at higher risk than you, and realize that you will get one eventually," he added.