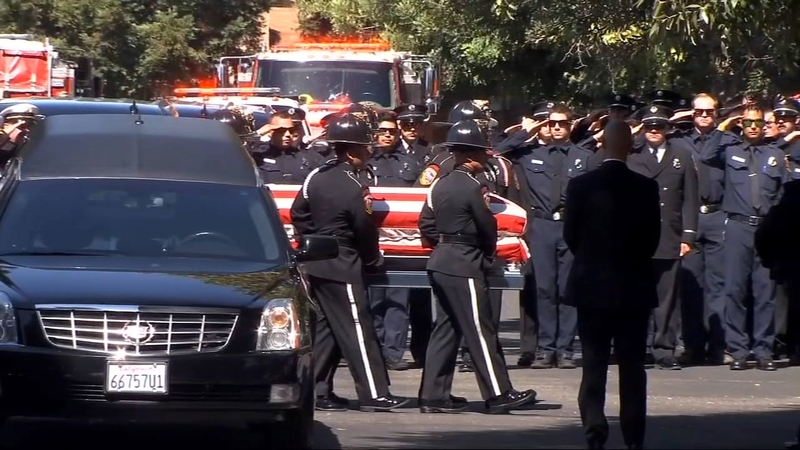 Helicopters and motorcades escorted the fallen firefighter into The House church in Modesto on Monday.

Thousands from #CALFIRE agencies statewide, along with sheriff departments, are now entering the church. @ABC30 pic.twitter.com/p8Ys4kJD9X

CAL FIRE Captain Jordan Motta described the support as, "From Ventura, to Los Angeles, from the coast, and all the way from the Oregon border, to San Diego, and all the points in between.

Varney was from Mariposa and worked for CAL FIRE as a dozer operator.

He was creating a fire break to prevent the Ferguson Fire from spreading when his dozer rolled over, and he died.

In Modesto this morning covering the service for fallen firefighter, #BradenVarney. Thousands are expected to be here today. Several agencies, including firefighters from Fresno and Mariposa, will be at the service. #Fergusonfire #mariposa @ABC30 pic.twitter.com/6XSCcpeTDj

With fast-moving fire, recovering his body was a challenge.

CAL FIRE Chief Nancy Koerperich said, "We had to deliver the news that we couldn't get Braden out. It was heartbreaking for us.

A few days later a team went in. Firefighters held each other as they recovered their fallen brother.

At the ceremony, Varney's wife, Jessica, displayed the gear her husband wore a day before he died.

It is a memento she says she will keep for her two kids as a sign of his love for his job.

"Not long ago I stood next to him, as someone was applauding him for his service. He just said, 'I'm just doing my job.' In reality, he was doing what he loved, more than anything in the whole world."

While the sound of bagpipes filled the room, a flag was given to Varney's family.