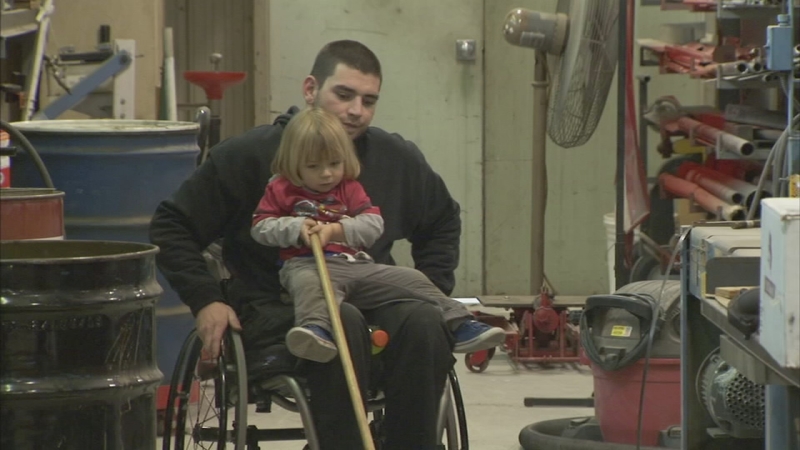 FRESNO, Calif. (KFSN) -- Cal Fire firefighter Damien Pereira has undergone several surgeries and extensive rehabilitation over the past six months. In July, a large oak tree fell on him while he was mopping up a fire.

Pereira is still in a wheelchair, he but was excited to show his friends. He can finally stand on his own again. "It was really good to see them," Pereira said. "I was just happy, you know. It's just good to sit down and talk with them for a little bit, missed it."

In a surprise visit, the firefighter who spent several minutes buckled beneath a massive oak tree stopped into the fire station headquarters.

"We heard that he had went home for the holidays from his treatment to San Luis to spend Christmas and the holidays and we were happy for that," Cal Fire unit chief Paul Marquez said. "So, I walked out the back door, and I saw he and his wife and his son there. It was a pleasant surprise."

Damien has spent several months recovering, first in Northridge and now in San Diego undergoing grueling and intense rehab. So far, he can extend his right leg and move his left foot. Doctors are giving him encouraging feedback. "They've come close to saying you're going to walk again," Pereira said. "But nobody's come out to just say that."

Although much of his excruciating pain is subsiding, sometimes his struggles are in the small unexpected moments. "It's more hard like when I see fire trucks or anything," Pereira said. "That's like the hardest part."

Fire trucks remind him of what he was once able to do with such ease. "I was really passionate about it, you know," he said. "It wasn't just a job. It was something I was really proud of."

For now, Damien is busy trying to keep up with his busy toddler, Greyson. He is also motivated by his wife, who has taken a leave of absence from her job as a registered nurse to care for him.

His family set up accounts for donations: GoFundMe and Fire Family Foundation