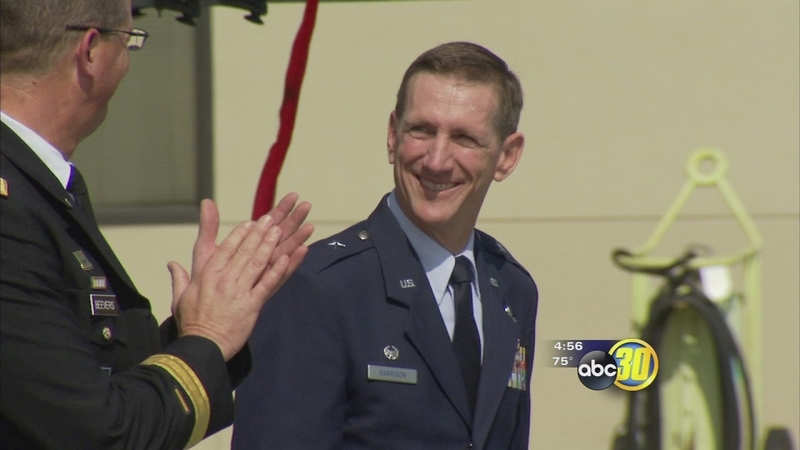 MADERA, Calif. (KFSN) -- Dreams do come true and a Madera man is learning just what that means and how it feels. Clay Garrison has been a Wing Commander for the California Air National Guard. On Wednesday, though, he stepped into the new position as the brigadier general.

On a warm Wednesday morning, Garrison walked out of the hanger doors to a crowd of people celebrating his latest accomplishment. "I'm looking forward to keeping the California National Guard relevant, engaged in the mission, and providing combat power for the United States."

Moving up from his position as a Wing Commander to a Brigadier General-- a promotion very few get to claim. "In order to be a general you have to be nominated by the president and confirmed by the senate," said Maj. Gen. Matthew Beevers, California Air National Guard.

He said advancing in rank and becoming a general is something he never saw coming. "This was, if you talk to my friends, not in a million years. It's something that you aspire to in your career," said Garrison.

It's even surreal for Garrison's mom, Mary Ann Crosson, who has watched her son's dreams come true. "When he was a little boy, at seven-years-old he was playing airplane and he says, 'mom, I'm going to be a jet fight pilot when I grow up.'"

Though far surpassing that goal, Garrison has not lost touch of what has gotten him to this moment, managing to motivate young airmen and women along the way. "It's inspiring when you see a general. There is just something else that puts a little more pep in you." said Sgt. Jason Ramirez, California Air National Guard.

And holding on to his humility, even after his last land, while doing it. "Wow, this is a big deal, but I'm not," said Garrison.