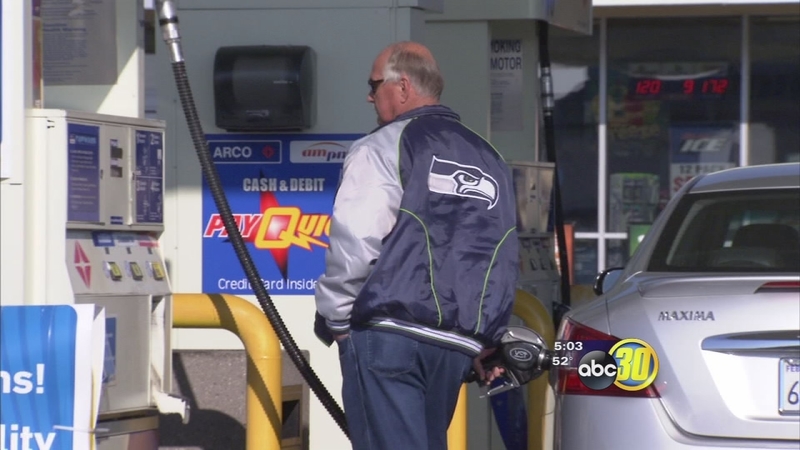 FRESNO, Calif. (KFSN) -- As 2014 comes to an end, so may the downward trend of gas prices. In just the last month, the average price for a gallon of gas dropped more than 40 cents in Fresno. According to AAA, right now the average in Fresno stands at $2.62. It was $3.03 a month ago. Starting January 1st, experts are predicting prices will inch back up and a new California law will help contribute.

Right now the price for a gallon of gas across the country, including in the Central Valley, is considered cheap. Bob Crowley, who was filling up at an Arco gas station in Fresno said, "It's amazing how it got this low to be honest with you." Dr. William Rice, an economist at Fresno State said, "A friend of mine lives in Texas and gas is $1.99! I mean, when's the last time you saw that?"

Starting January 1st, though, those declining gas prices aren't expected to go any lower. The beginning of 2015 also brings with it what some are calling California's new hidden gas tax, which could range from 15 cents per gallon to up to 75 cents. Some in the Central Valley aren't happy about the extra cost at the pump. JoAnne Childers of Fresno said, "I don't like it. It's just something else to gouge us for."

Others seem unfazed by the new law, also known as AB-32, which ultimately aims to cut down on California's greenhouse gas emissions by adding a tax onto gas and oil. Darren Harper of Fresno said, "It doesn't matter. You've got to get fuel anyway. You complain about it but then people complain about it while they're putting it into their vehicles so it doesn't matter to me. It's better than it being $4.50 or whatever it was a couple years ago."

Fresno State marketing professor William Rice predicts most people won't even notice the slight increase in price come the new year. Rice said he expects the cost of a gallon of gas to go up no matter what in 2015 because of how countries an oil companies around the world are being affected by the cheap prices. Rice said, "When they're used to having what $80-90 a barrel, now it's getting down to $40 a barrel? That's a lot, that's half their revenue and yet countries like Venezuela are in almost economic collapse because of it."